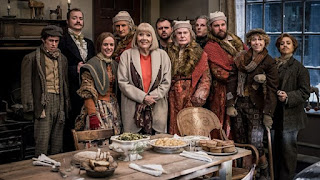 Sir Derek Jacobi and Dame Diana Rigg will join the Olivier Award-winning Mischief Theatre Company on BBC One this Christmas, as they bring another dose of comic chaos to the small screen with A Christmas Carol Goes Wrong....

This special adaptation of Dickens’ classic Christmas tale will see Derek Jacobi play the famous miser Ebenezer Scrooge in the BBC’s ‘professional’ production of A Christmas Carol - until it is hijacked by the Cornley Polytechnic Drama Society and he is hauled out while on air! Diana Rigg is playing the aunt of Sandra, one of the Cornley crew, and will also step in as the narrator, as well as on the accelerator as she races against the clock to make it to the recording before the curtains close.

Derek Jacobi, who portrayed Dickens in the 2007 film The Riddle, says: “It’s always a delight to be reacquainted with Dickens and A Christmas Carol is emblematic of this time of year. I hear that last year’s festive theatre production was an all-out shambles, but thankfully the BBC has called in the professionals for this one…”

Diana Rigg says: “I can’t wait to bring merriment and mischief to audiences this Christmas, with the wonderful Cornley Polytechnic Drama Society. And I have also been entrusted with another very important job – all will be revealed soon but let’s just say hearts will be warmed this winter!”

Shane Allen, Controller Comedy Commissioning at the BBC says: “A Christmas Carol Goes Wrong was already shaping up to be a seasonal highlight but with Sir Derek Jacobi and Dame Diana Rigg joining the cast it’s an unmissable television event. Let’s hope nothing goes wrong.”

Mischief Theatre’s A Christmas Carol Goes Wrong is a BBC Studios Production for BBC One and is being filmed at MediaCity UK in Salford.