Turn That Noise Down - The Princess Bride 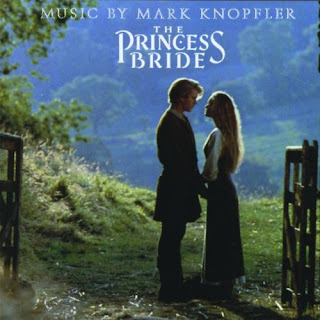 So many well-known albums turn 30 this year and Steve Taylor-Bryant and Susan Omand travel back to 1987 to revisit some of the sounds of their youth that made parents shout "Turn that noise down!" This week Susan wemembers wuv, twue wuv...

Come my love, I'll tell you a tale
Of a boy and girl and their love story

The Princess Bride – one of those films that really shouldn’t have been a cult hit but it so much is. It’s pretty much a typical fairytale of good triumphing over evil as farmhand Westley tries to rescue his love, the princess Buttercup, from the clutches of the evil Prince Humperdinck after she marries the prince believing Westley to have died. But there’s so much more to it than that with swashbuckling sword fights and revenge and pirates and giants and men with six fingers and... and... and... Everybody who has seen the film loves it (no Steve, I’m not counting you because you didn’t get to watch it properly). Fans love everything from the fact that Columbo is Kevin from the Wonder Years’ granddad to the albino dungeon keeper and the rodents of unusual size. They quote great swathes of dialogue to each other, like that famous speech by Inigo Montoya, or the “is this a kissing book” discussion, or the fact that inconceivable doesn’t mean what you think it means or...

But I’m not here to talk about the film, VentSpleen does that very well here, I want to look back at the soundtrack by Mark Knopfler. Mr K was much more well known at the frontman of Dire Straits at the time but he had done a few soundtracks before this one, notably that very famous Local Hero film. But, until The Princess Bride, most of his soundtrack work sounded like “him” if you know what I mean, his guitar work was very much front and centre. Not so here – this is not yer typical Dire Straits rip off. The soundtrack moves from the medieval folk tune of the Florin Dance to the richly orchestrated Morning Ride without missing a beat. The slow build of the Friends’ Song (no, not that Friends song) with its interesting pizzicato backing and shades of “If I Was a Wealthy Man” to the tension building basso brass, glissando scales and crashing percussion of The Cliffs of Insanity proves that Knopfler is about much more than just brilliant guitar. He can orchestrate and influence, evoke emotion and build aural pictures, like using a Spanish tarantella feel in a minor key to suggest the swordsmen circling each other in The Swordfight, in a manner that is good enough to rival some of the best names in film scoring. And I love the way that the main theme’s motif carries throughout all the other melodies on the album, from Never Love Again to Guide My Sword to Happy Ending, to tie the whole film together.

Does it work as a standalone album to sit and listen to if you don’t know the film? Not really but, to be honest it’s not really meant to. It is a soundtrack album after all and is meant to enhance and add depth to the visuals rather than provide sing-along distraction. But it is a beautiful classical score to have on while you’re doing something else. And there is some singing with the official end credits theme that went on to win the Oscar for Best Original Song that year. What's that? A reminder of the song? As you wish...