Turn That Noise Down - George Harrison 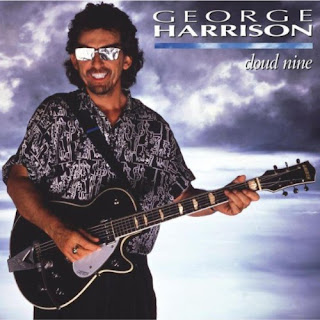 So many well-known albums turn 30 this year and Steve Taylor-Bryant and Susan Omand travel back to 1987 to revisit some of the sounds of their youth that made parents shout "Turn that noise down!" This week Steve is on Cloud Nine...

I’m not sure why but it’s taken me most of my forty odd years on this planet to appreciate George Harrison. I loved John Lennon, as a lyricist and a performance artist, I sort of have a love/hate relationship with Paul McCartney, and who doesn’t dig a bit of Ringo? Thomas the Tank Engine was never the same after he left. But George Harrison? I know I’m supposed to think he was the smart and talented Beatle. I know I’m supposed to appreciate the Travelling Wilburys as much as you all do, but I just never ‘got’ him. Until Prince passed away and that video of them all playing started to circulate on social media. That day something just clicked inside of me and I started to see what everyone else had seen for all those years; a supreme talent. I started to dive back into his archives and started to love his voice, his guitar style which was impressive yet understated, and his way with a lyric. My wife had been a fan for years and her favourite song of his was Got My Mind Set On You so when the chance to relisten to the album that tune came from was presented to me I jumped at it.

Cloud Nine starts with its title track and a mellow, Eric Clapton style tune that surprisingly has some dirty sounding saxophone almost for no reason but that just sort of works, raunchy sax the opposite of the smooth singing style of Harrison. Great start to the record. That’s What It Takes seems somewhat familiar, enjoyable without blowing my socks off and is followed by Fish On The Sand that does blow my socks off. It's by far my favourite tune on Cloud Nine. Just For Today is beautiful but sounds like it belongs in Lennon’s back catalogue rather than here. This Is Love is okay but sounds too much like most other things in 1987. When We Was Fab was a brilliant nod to his former band, very Day in the Life. Devil’s Radio and Someplace Else are good little album songs but kind of what I expected from a George Harrison album back when I wasn’t a fan. Wreck of the Hesperus is a great tune, right up there with Fish On The Sand in my affections, mainly again for use of saxophone and brass than anything else. It just sort of works. Breath Away From Heaven starts by sounding like a radio advert for a Chinese take away but grows on you as you get further into the track, a lot of what’s going on musically underneath the Far East influences is very Beatle-esque. Got My Mind Set On You is my wife’s all time favourite song, it cheers her up whenever she feels low, it makes her bounce about like a nutter if she’s having a good day. For that I thank George Harrison for writing it. If I wasn’t married I probably wouldn’t give the track a second listen but it’s creating wonderful memories so I have to like it really don’t I? Shanghai Surprise brings another Far East influenced song that unfortunately doesn’t hold up to repeated listens like Breath Away From Heaven does. The album finishes with Zig Zag which is a treat for the ears, musically diverse with decades of influences running right through it. Gorgeous end to the album.

I think, along with producer Jeff Lynne, Harrison put together a sublime mix of all he possessed. There was clever lyrical work, all styles of music, and most of all there was a passion for fun music that was core in every track. This sounds like Harrison and pals (Clapton, Ringo, Elton John et al) just letting loose and having a great time together making music. Is it the best album I’ve ever listened to? No, of course it’s not but it’s one of the most heart warming listening experiences I’ve had for many a year.