Turn That Noise Down - Eurythmics 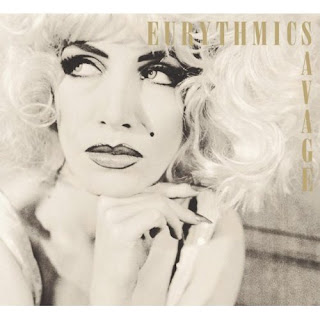 So many well-known albums turn 30 this year and Steve Taylor-Bryant and Susan Omand travel back to 1987 to revisit some of the sounds of their youth that made parents shout "Turn that noise down!" This week Susan goes native with Savage...

As you’ll know, since I bang on about it often enough, there are very few female pop singing voices that I actively enjoy listening to. Annie Lennox is one of them. It also helps that she is a fellow Aberdonian, but that is by the way, so the Eurythmics album Savage was an obvious 1987 choice for me when it came up.

Right off the bat I’ll say Savage as an album is an acquired taste but very much the dark horse of their studio albums with a lot to recommend it. It’s a return to their much more experimental side with programmed samples and drum loops at a time when this was still very cutting edge technology in the mainstream music industry. The songs themselves are a lot darker lyrically and fit together on the original album (the remastered add-ons muck this up) as a homage to prog rock concept albums, telling a story in the progression of the tracks. That’s not to say they don’t stand up on their own, they definitely do and there were four singles off the album in the UK, although the US largely ignored their existence. Other than the four tracks you’ll recognise from the charts – Beethoven (I Love to Listen to) which I absolutely adore for its inventiveness, Shame, I Need a Man and You Have Placed a Chill on My Heart – there’s an eclectic mix in styles. I’ve Got a Lover (Back in Japan) which starts off very like Giorgio Moroder’s Electric Dreams, purely because of the synth and electronic drums, leads into a (hopefully ironic) shopping-mall-pop song Do You Want to Break Up, however Lennox’s rich vocals just about save it from being too sugary. The title track is surprisingly placed in the middle of the CD album (which works out as the end of the first side of the vinyl – I know these things for I am old.) It’s a beautiful slower song that showcases Dave Stewart’s guitar work just as much as the vocal and is the epitome of why they worked well as a partnership.

Put the Blame on Me comes after I Need a Man and is, for me, a bit filler-y – great to dance to but not much more. Heaven follows with a real Michael Jackson feel to it (this is a good thing in this case) and Wide Eyed Girl is a basic 80’s rock track with interesting vocal use, from melodic to rock scream. My joint-favourite on the album though, alongside and diametrically opposite to Beethoven in every way, is I Need You. This is Annie Lennox at her Bob Dylan best, stripped back to just vocals and guitar you can imagine her singing this on a small stage in the corner of a smoky bar on an open mic night and it is brilliant. The album rounds off with Brand New Day, which has a brilliant a capella start that borders on gospel in its richness before it drops back to being an OK 80s song, slightly overworked but still pushing the envelope so to be applauded for that.

But for inventiveness on this album, nothing can hold a candle to Beethoven, especially through headphones for the amazing stereo movement, and nobody comes close to Annie Lennox for sheer vocal brilliance.