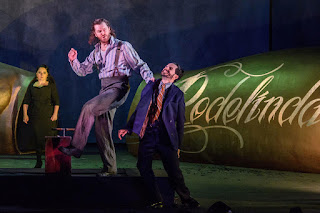 I should begin this review with the typical preamble. I am not an expert on opera. I have - to this point - seen twenty-seven productions of eighteen different operas*. Those have mainly been the more popular ones: the Mozart, Rossini, Verdi and Puccini, ‘Classic FM’ favourites. And if you want to get started with opera that’s where I’d recommend you start because – frankly – if you don’t like Madam Butterfly or La Boheme you are probably not going to like opera. Full stop.

Rodelinda is by George Frederic Handel and was first performed in London in 1725. The only other Handel I’ve seen was Xerxes, which I confess I didn’t enjoy greatly. The reason was that it seemed to be a cliché of what opera was like to the uninitiated: people singing the same words repeatedly at an increasingly hysterical level. So, I admit I booked Rodelinda with some hesitation.

Now, the first act didn’t reassure me. At the end of it I was wondering whether this was something I would enjoy.

The plot is – roughly - as follows: Grimoaldo (Juan Sancho) has usurped the throne of Milan killing Bertarido (Tim Mead) in the process. Except Bertarido is not dead. He’s in hiding. Grimoaldo wants to marry Rodelinda (Rebecca Evans), who was Bertarido’s wife. She doesn’t want to marry him, even though she thinks her husband is dead. Grimoaldo is supposed to be marrying Eduige (Susan Bickley) though, who is Bertarido’s sister. She finds Grimoaldo’s infatuation with Rodelinda rather irritating and has plans of her own for taking control of Milan. Grimoaldo is encouraged in ruthless by Gardibaldo (Neal Davies) who is a sophisticated thug. There’s also a servant, called Unulfo (Christopher Lowrey)

For musical context Grimoaldo is a tenor, Bertarido and Unulfo are counter-tenors, Rodelinda and Eduige are sopranos and Garibaldo is a bass-baritone. Counter-tenors are male singers whose voices are pitched at the higher end. They sound feminine (or pre-broken voice boyish). In the original production both parts were played by Castrati (who were basically men whose voices had not broken because they’d been castrated. The clue is in the name.). Castratos would have sung even higher than Counter-Tenors.

I pause to explain all this because I didn’t really know much about counter-tenors and Tim Mead is magnificent as Bertarido. His voice is magnificent. There are two highlights: the song he sings in Act One, which he sings when standing beneath his own magnificent memorial and the duet with Rodelinda that ends Act Two. Both Rebecca Evans and Tim Meads perform this beautiful piece of music wonderfully. They probably have proper names but alas the ENO programme doesn’t have them in English and I’d be hopeless at guessing them from the Italian. See, this is half-arsed amateurish reviewing of the worst kind.

It was Tim Mead’s voice though that made me want to persevere with Act Two. And I’m glad I did. It got better and better. I found myself gripped and emotionally dragged in. I’ve already mentioned the end of Act Two musically. It also is something of a highlight theatrically as the split sets split and husband and wife, just united are slowly separated.

It’s a dark tale this but it isn’t without humour, particularly featuring Unulfo. The song that follows Bertarido’s accidental wounding of Unulfo is funny despite – or perhaps because of - the blood. If you’d told me about half-an-hour in that I was going to enjoy this as much as I did I would have laughed. It was genuinely a fantastic two and a half-hour (plus intervals) and all for £20, which can’t be bad.

I should say that despite my focus on Tim Mead that the whole cast is great. Christopher Lowrey gives Unulfo a glorious dignity in the face of much ill-treatment, Neal Davies makes Garibaldo sinisterly comic or comically sinister depending on your point of view. He reminded me a bit of a character that might have come from Mr. Jolly Lives Next Door, which is an odd reference, but I stand by it. Susan Bickley has both comic timing and a great line in snark. Her voice is fabulous, but she also does some fine work with just a look. Rebecca Evans is a magnificent Rodelinda. I won’t mention the end of Act Two again. So, let me mention that I adored her song that explains to Grimoaldo how much she loathes him. And she really does loathe him. Juan Sancho sings well and makes Grimoaldo seem almost sympathetic as he struggles with the reality of what he’s done and what he’s trying to do. Machiavelli would be disappointed in Grimoaldo who is unable to be as ruthless as a Prince should be, which Garibaldo tries to point out to him several times.

Oh, and a word here for Matt Casey who plays Flavio, the son of Bertarido and Rodelinda. He gets no lines. Doesn’t sing a word but is on stage for vast amounts of time. He does acting. He gets to play with sharp objects. It’s an odd role.

So, in the end I thoroughly enjoyed this production. Perhaps Handel isn’t such a slog after all. Perhaps though, like all these things, it needs the right production with the right people in it to shine.

Book tickets for the current ENO production, which runs until 15th November HERE.

Listen to Iestyn Davies sing 'O, Where are you, dearest beloved?' from a previous (2014) ENO production of Rodelinda