Review - The Music of Hans Zimmer vs John Williams 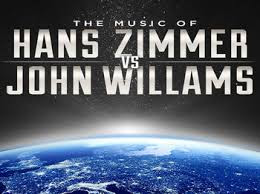 VentSpleen witnessed a battle of the Supermen in Southend as The London Concert Orchestra conducted by Anthony Inglis played The Music of Hans Zimmer and John Williams...

On Sunday night I was back in Southend for a concert that I had looked forward to for months. Like the superheroes they soundtrack for, two musical gods stand head and shoulders above all others. They have provided the musical composition for film after film and have earned their legendary status many times over. Now I like Hans Zimmer but I also like John Williams, but who is best? There's only one way to find out! FIGHT!!

From the opening fanfare of Star Wars to the immediately recognisable flourishing strings of E.T you know you are listening to a John Williams composition. His partnership with directorial titan, Spielberg, spans decades and has yielded scoring that is as much a part of cinematic history as the films they accompany. Indeed, Williams has composed for all but three of Spielberg's films (The Colour Purple, Bridge Of Spies and Ready Player One) However, in recent years another musical talent has started to create work of such genius that he threatens Williams dominance of the soundtracking world. Hans Zimmer has been working for years and yet I only really started to notice him with his astounding work for Pirates Of The Caribbean. Zimmer's work with director Christopher Nolan has proved to be match made in cinematic heaven and he has continued his run of genius with a breathtaking soundtrack for the Bladerunner sequel. As the lights dimmed and the hugely talented London Concert Orchestra readied themselves it was with much excitement that I looked forward to a celebration of musical achievement.

I've always found John Williams style of composition to be very reminiscent of the classical masters with an expert handling of the orchestra and the main themes being passed from strings to brass sections. Variations on variation move through his work before returning to the main theme before finishing with a full orchestrated conclusion. Williams has always favoured the leitmotif with his work (the use of a character based theme which is orchestrated in some way every time they are onscreen) with the best example being the fabulous JAWS theme. So strong is the link between character and music that with JAWS the familiar bass tones act as stand in for the shark. Williams' music works so effectively with Spielberg's films because he creates music that accentuates what is visually stimulating onscreen. The scoring for E.T perfectly reaching a dizzying height as the BMX bikes lift into the air and again as E.T's mother ship lifts off into space. Williams has often stated that his work for Close Encounters represents some of his finest and the 12 minute suite certainly alludes to this. Starting, as the film does, with seemingly random encounters (musically depicted by the scream of violins) it soon moves together centralising around the communication of aliens with mankind. Personal favourite for me has always been the anthemic Raiders March from Indiana Jones and I've always enjoyed how it segues into the main love theme before finishing back with the classic march sequences. The mark of how successful a soundtrack is should be that it makes you want to rewatch the film, I now have a huge backlog of films that I need to revisit. 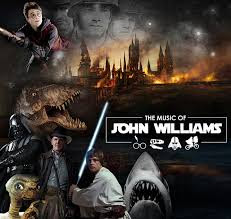 Every Williams anthem that was unleashed found itself answered by something from the Zimmer back catalogue. Whether you look at his work with the DaVinci Code or from his astounding collected soundtracking from Nolan's Batman trilogy there is composition of equal genius. Equal and yet different as Zimmer's composition style is of a more modern and collaborative style to that of Wiliams. Zimmer heads up a large group of orchestrators, composers and technical staff and his work fuses synth landscaping with live orchestral performance. His use of strings is different and can be seen with the intensity and almost nightmarish quality they occupy for Dark Knight Rises. He does stray into Williams, more traditional, territory for his work with Gladiator and comparisons with Das Rheingold would not be off the mark. Zimmer was approached on three occasions by Director, Zack Snyder, before agreeing to compose for Man Of Steel. Zimmer's anthems for the film are radically different to that of Williams with Superman but in producing something significantly more percussive he delivers his own signature pieces. I love Zimmer's memorable work for Inception and the plaintive piano bars move into orchestra brilliance of an appropriate dream like quality. Zimmer's collaborative approach means that his work is rich with variety and whilst you can certainly hear strains of Pirates within Gladiators he doesn't use the same phrasings as Elfman does. I love Danny Elfman's work but you do get the feelings sometimes he is in love with his Batman work and reuses it a little too much. Whilst orchestral purists will, no doubt, prefer Williams over Zimmer, I love the fusing of old and new world. It would be hard to argue against the effectiveness of his work for Dunkirk and the overall impact of the film is substantially increased because of the soundscaping.

As the evening draws to a close I find it impossible to choose between the two composers. Both have their own styles but have created musical composition that I have come to love dearly. However, as the orchestra closes on the main theme from Star Wars and Superman, Williams wins with a large margin because.... nothing beats Superman or betters Star Wars for its sheer astounding brilliance.