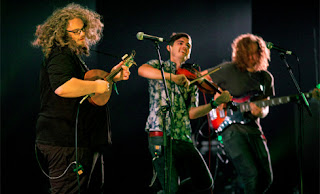 Shortlisted nominations for the MG ALBA Scots Trad Music Awards 2017 were announced this week. Here's how to vote for your winners...

Heralded as the most prestigious award ceremony in the traditional music calendar, sixteen awards will be handed out during a glitzy award ceremony on Saturday 2nd December, at Paisley’s Lagoon Centre as Paisley bids for UK City of Culture 2021. Voting for the shortlisted acts is open until 24 November and votes can be cast online via www.scotstradmusicawards.com.

The Album of the Year (sponsored by Birnam CD) is one of the most sought-after awards and competition is stiff this year, with 10 nominees all vying for the top spot including Elephant Sessions, Mànran, and Ímar, alongside Ryan Young who last year won the Up and Coming Artist of the Year award.

Oban Live and the Killin Music Festival are among the nominees for the Event of the Year category (sponsored by VisitScotland), while Community Project of the Year (sponsored by Gordon Duncan Memorial Trust) nods to Tiree Songbook and EPL Events, among others.

The awards night itself will be jam-packed with live performances from The Shee Big Band, who are roping in honorary Shees from throughout their eleven years to join them on stage, as well as performances from nominees Elephant Sessions (pictured above) and Siobhan Miller, making it a must-see event.

Event founder and promoter, Simon Thoumire, said “A massive congratulations to all of our shortlisted nominees – we can’t wait to welcome them to Paisley for the ceremony. We want to say a huge thanks to everyone who has voted – with such a wealth of amazing Trad talent in Scotland, we’re sure it wasn’t an easy task.  Hands Up for Trad are dedicated to showcasing the level of talent in this country, and the awards are a real highlight in the calendar each year. We can’t wait for an unmissable night of live music on Saturday 2 December – make sure you get involved!

Alan Morrison, Head of Music at Creative Scotland, added “At home and abroad, this has been a fantastic year for Scotland’s traditional music scene.  Our finest artists have had festival tents jumping and radio airwaves buzzing, winning awards and embracing new audiences everywhere they go.  Stars of the future have taken big leaps forward while the veterans who paved the way have enriched our culture even further. The sheer breadth of their talent is celebrated at the Scots Trad Music Awards, which Creative Scotland is delighted to support through Hands Up For Trad. Best of luck to all the nominees.”

Tickets are available now, and can be purchased by calling 0300 300 1210 or visiting http://www.paisley2021.co.uk/events/. They can also be bought directly from Paisley Arts Centre.

Album of the Year sponsored by Birnam CDs

Composer of the Year sponsored by PRS for Music

Live Act of the Year sponsored by Greentrax Recordings

Up and Coming Artist Award sponsored by Royal Scottish Conservatoire

Music Tutor of the Year sponsored by Creative Scotland

Gaelic Singer of the Year sponsored by Macmeanmna

Folk Band of the Year sponsored by Threads of Sound

Club of the Year sponsored by Tradition Arts and Culture Scotland

Event of the Year sponsored by VisitScotland

Trad Music in the Media sponsored by Skipinnish

Venue of the Year sponsored by Musicians' Union