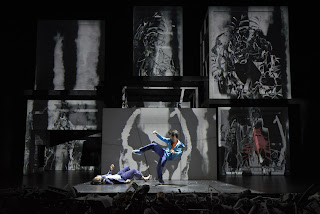 The Barbican presents the UK premiere of Sidi Larbi Cherkaoui and Bunkamura Theatre Cocoon’s Manga based theatre production Pluto in February next year...

Created in the 1950s, the Astro Boy series starred Atom, a humanoid robot. He and other characters from The Greatest Robot on Earth storyline feature in Pluto – originally serialised in 2003 by Naoki Urasawa and Takashi Nagasaki and now the basis for this first full-length theatre production.

Depicting a universe where people and robots both coexist and find themselves in conflict, Pluto investigates what humanity can learn from automatons. Starring skilled Japanese actors known for their versatility, including Mirai Moriyama, alongside dancers and elaborate puppet creations, the staging is characterised by an energy and scale faithful to the original comic book.

Pluto is performed in Japanese with English surtitles.

Pluto is Cherkaoui’s second work based on the manga of Osamu Tezuka. The first, a dance piece entitled TeZuKa, premiered at Sadler’s Wells in 2011, and was inspired by the philosophy, drawings and characters of the manga artist and animator.

Sidi Larbi Cherkaoui is a multi-award winning dancer, choreographer and director. He has created over 50 choreographic works for dance, theatre and films. From 2004 to 2009, Cherkaoui was artist in residence at Toneelhuis in Antwerp. In 2008 he premiered Sutra, a collaboration with Antony Gormley, which won an Olivier Award for Best New Dance Production. The production is remounted at Sadler’s Wells for its tenth anniversary in March 2018, where Cherkaoui is an Associate Artist. Cherkaoui has collaborated with a host of choreographers, visual artists and directors including Akram Khan (zero degrees 2005), Marina Abramović (Boléro, Paris Opera Ballet, 2013), Joe Wright (Anna Karenina, 2012 film and A Season in the Congo, 2014, Young Vic). In 2015 Cherkaoui was movement director for Lyndsey Turner’s Hamlet starring Benedict Cumberbatch which played in the Barbican Theatre, and was broadcast to cinemas worldwide by NT Live. Cherkaoui is currently Artistic Director of the Royal ballet of Flanders.

Running from Thursday 8–Sunday 11 February 2018 at the Barbican Theatre, Find out more and book tickets HERE