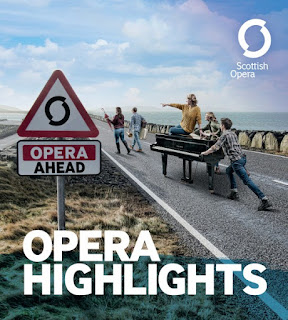 Having already journeyed to 17 venues across the country in the Autumn, the Spring tour begins on 6th February in Livingston before heading to Hawick, Callander, Midmar, Halkirk, Kirkwall, Tain, Braemar, Montrose, Lerwick, Castle Douglas, Ballachulish, Pitlochry and Rutherglen.

Scottish Opera’s Head of Music Derek Clark has curated an extremely varied programme including favourites from Rossini’s Barber of Seville, Mozart’s Così fan tutte and Gilbert and Sullivan's The Gondoliers, as well as lesser known gems rarely performed on the Scottish stage. Opera Highlights, which tells the story of Henrietta and Leon, two stage managers who have to cope with the demands of opera stars Sophia and Petrach every night on tour, also features a new work, entitled ‘Wings’, created especially for the tour by Scottish Opera’s Emerging Artist Composer in Residence Samuel Bordoli. With something for everyone, from opera first timers to seasoned fans, Opera Highlights promises an intimate performance of great music.

Director Jack Furness said: ‘Autumn’s Opera Highlights was a really beautiful show to make, and re-exploring that with a new cast is going to be a fun adventure – I’m looking forward to it hugely. William Morgan and I had a great creative partnership going in the Autumn, and it will be great to see how we can push his character further. It’s great to be working with Máire Flavin again. We did a show together in Aberdeenshire, and she was really sensational in the role of Violetta. I’m excited to see what she brings to this role. I’ve also been wanting to work with Benjamin Lewis for a long time. He’s one of the most exciting young baritones in the UK and this should be a real treat for audiences. And of course, Emerging Artist Catherine Backhouse who has been so brilliant in Scottish Opera’s La traviata. Working with Patrick Milne at the piano, I’m hoping we can push the show’s blend of off-beat comedy and theatrical depth into ever more interesting places.’

Scottish Opera’s General Director, Alex Reedijk, added ‘Touring Scotland is at the heart of what we do and Opera Highlights is the perfect show to take to smaller and more remote communities around the country as it truly has something for everyone. After a successful 17- date Autumn tour, which saw the Opera Highlights team travel around Scotland from Stornoway to Stranraer, we’re thrilled to be able to take the show on the road again this Spring. The Autumn Opera Highlights tour was a hit with audiences, and director Jack Furness’ imaginative approach will no doubt bring out the best in this Spring’s fabulous young cast.’

Here's the trailer from the Autumn tour.