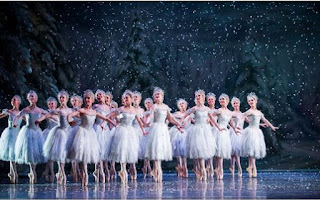 Returning to the Covent Garden stage and screened live in cinemas on Tuesday 5th December, Peter Wright's captivating production of The Nutcracker is a glittering festive treat for audiences of all ages...

Peter Wright’s nigh-on definitive production for The Royal Ballet ranks as one of the most enduring and enchanting versions of The Nutcracker. With its festive period setting, dancing snowflakes and enchanting stage magic, Lev Ivanov’s 1892 ballet has become the perfect Christmas entertainment, with Tchaikovsky’s sumptuous, sugar-spun music the most recognizable of all ballet scores. Loosely based on the story by E.T.A. Hoffmann, the ballet opens with the lively Christmas party that is hosted by the Stahlbaum family, its Victorian setting captured in opulent detail by Julia Trevelyan Oman’s designs. Wright’s choreography ingeniously incorporates surviving fragments of the ballet’s original material, including the sublime pas de deux for the Sugar Plum Fairy and her Prince.