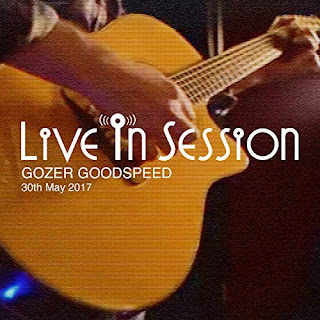 There's a new live 6 track EP out from Gozer Goodspeed...

We've been following the rise and rise of the Plymouth based singer songwriter Gozer Goodspeed for a while now so we were excited to find out that a new live EP had appeared this week and talked to the man himself to find out more about it.

Back at the end of May, Gozer Goodspeed headed down to what was then Beliefspace Studios in Mutley, Plymouth, to play an acoustic set for Live In Session in association with the Plymouth Herald, which was live-streamed to around 14,000 people via the Herald's Facebook page. Even though it was very warm on the day, "I didn't so much 'sweat bullets' - it was more like 'sweat entire rounds of artillery' during the session," Gozer said that doing the live-stream was "hugely fun and satisfying." He added "It's about as stripped-down, honest, no frills & as intimate as my music gets."

Now, courtesy of Agent Audio and Live In Session producer Stuart Welsh, the high-quality audio recording from that session has been released as a 6-track EP, Live in Session with Gozer Goodspeed. Looking back on the day, Gozer said, "It's interesting as a snapshot of a particular time, as my live show nowadays is very different and features extensive use of layering via a loop pedal. But this was recorded pre-looping." 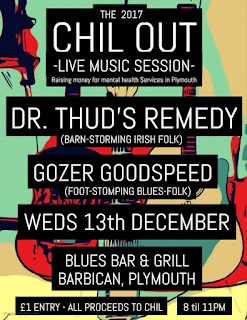 But the release of this new EP doesn't mean Mr Goodspeed is resting on his festive laurels and not playing any more live music - far from it. In between his many Devon pub and club gigs coming up, he is also a big part of a charity gig on December 13th for a local mental health charity CHIL. Gozer told us more about the charity and the show.

"Mental health is a massive issue in Plymouth, just as it is in most major cities across the land. Chances are, if you yourself haven't struggled, someone close to you has. CHIL is actively working to help community members in need of support across Plymouth, and they desperately need our help to continue to provide their vital services. So this is a show to raise cash for the desperately underfunded charity that so many people in this city have come to rely on. The gig takes place at Plymouth's Blues Bar on Wednesday 13th December and features me, local Irish folk party-band Dr Thud's Remedy, and a couple of special guest appearances."

Entry costs just £1 and all proceeds will be going straight to CHIL.

Live in Session with Gozer Goodspeed EP is available NOW on Amazon, Apple Music, Spotify and all other streaming/digital platforms.

Here's a reminder of the first song on the EP, with a live version of Raise & Not Lose from last year.

Raise & Not Lose
Rattlebone Colour
Man with the Ruined Knee
Far Away, Blissed Out & Free
Every Night, Saturn's Rings
Barrel Headlong Into the Night