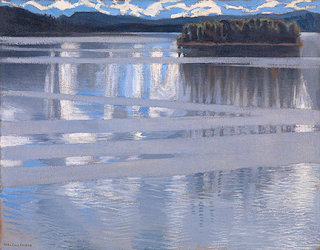 This winter, visitors to the National Gallery in London can discover a selection of paintings by the Finnish artist Akseli Gallen-Kallela in the first exhibition in the UK devoted to this artist...

Lake Keitele purchased by the National Gallery in 1999, with its cool, silvery elegance and meditative quality, has become one of the Gallery’s best-loved works and remains the only painting by this artist in a British public collection. 'Lake Keitele' has never before been the subject of an in-depth study.

In the exhibition, all four versions of Gallen-Kallela’s 'Lake Keitele' composition are reunited for the first time in the UK and within the context of the artist’s landscape work. Two 'Lake Keitele' landscapes have been borrowed from private collections, one of which is on long-term loan to the Gallen-Kallela Museum, near Helsinki; the third comes from the Lahti Art Museum/Viipuri Foundation, Finland.

Lake Keitele: A Vision of Finland looks closely at the genesis and meaning of this deceptively simple image: a view of a lake bathed in brilliant summer light, celebrating the unspoilt beauty of the Finnish countryside. The four landscapes are shown side by side, in the order in which they are believed to have been painted, allowing visitors to study the gradual shift from a directly observed, naturalistic landscape to a highly stylised and abstracted image.

The exhibition also gives the public a chance to explore the work of Gallen-Kallela, one of Finland’s most prominent artists, whose career was inextricably linked to the history of his country. At a time when Finland was struggling for independence, having been under foreign rule for eight centuries, Gallen-Kallela’s paintings came to embody the country’s cultural nationalism and to symbolise Finland’s struggle for political autonomy. This was finally achieved 100 years ago in December 1917. 'Lake Keitele: A Vision of Finland' is timely as it marks the centenary of Finland’s independence.

A prolific artist, trained in Helsinki and Paris, Gallen-Kallela painted ambitious works fusing Continental influences such as naturalism and symbolism. Well-travelled and universally successful in the salons and exhibition rooms of Europe, Gallen-Kallela remained attached to his native Finland all his life. He developed his own distinctive visual language, vigorous and archaic, for depicting the ancient legends of the 'Kalevala', the Finnish national epic, a compilation of age-old poems glorifying the country’s heroic roots – an aspect of his work for which the artist remains most famous.

Spanning 30 years of Gallen-Kallela’s career, the exhibition features a dozen works, centred around the four versions of 'Lake Keitele'. A group of his earlier landscape works helps trace the elaboration of the composition, while attesting to his assimilation of Continental trends. A rare, early stained-glass artwork of a lakeshore view by Gallen-Kallela (1896) demonstrates not just the artist’s skills in various media, but also the central significance of Finland’s natural scenery in his oeuvre.

Additional paintings of lakeside landscapes executed in the summer of 1904 evoke the fruitful months spent by the artist on the shores of Lake Keitele, painting its glorious setting, while two works on themes from the 'Kalevala' emphasise the mythical dimension of the 'Lake Keitele' landscape. In addition, a recently discovered late pastel stresses the ongoing significance of the subject for Gallen-Kallela. Coming primarily from Finnish collections, public and private, many of these works have rarely been exhibited publicly.

Anne Robbins, Associate Curator of Post-1800 Paintings at the National Gallery and curator of the exhibition, explains:

“With its silvery reflections, drenched in crystalline Nordic light, 'Lake Keitele' is an immediately appealing work, and one which truly captivates the public, holding its own against the Gallery’s famous Monets and Van Goghs. We have long wanted to look further into this work, to decipher its many layers of meaning, and are thrilled to have been able to reunite the four versions in this focused exhibition. I hope it will be a revelation, introducing a highly distinctive artist whose life intersected with the history of Finland, and throwing light on a painting which has not ceased to enthral visitors.”

National Gallery Director, Dr Gabriele Finaldi, added, “Beautiful and rich in symbolic meaning, Gallen-Kallela’s 'Lake Keitele' has become one of the National Gallery’s most popular pictures. This is the first exhibition we have devoted to Finnish painting in Trafalgar Square and it marks 100 years of Finland’s independence.”

The exhibition is accompanied by the first National Gallery book dedicated to Gallen-Kallela and this specific work. The catalogue examines Gallen-Kallela’s 'Lake Keitele' in the context of the artist’s oeuvre, as well as in the international and historical setting in which this landscape was painted.