News - It's Christmas at the Royal Albert Hall 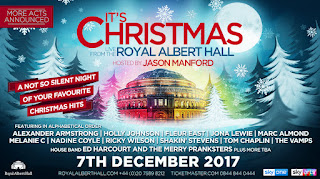 The Royal Albert Hall will ring with favourite Christmas hits, old and new, at this festive celebration, which will be caught on camera for a magical Christmas special to be aired on SKY ONE and SKY ARTS over the holiday period...

The musical director for the event is acclaimed singer-songwriter Ed Harcourt, who will lead his band, The Merry Pranksters. Harcourt is also putting together a choir and an orchestra especially for the event, which will be accompanied by the award-winning string quartet Dirty Pretty Strings. The emphasis will be on Christmas classics that everyone knows, loves and can sing along to. In addition there will be surprises in the form of unusual covers and collaborations.

London’s iconic Royal Albert Hall provides its own magic to the evening. The great London concert venue will be transformed into a rock ‘n’ roll winter wonderland, complete with snowflakes, Christmas trees and sparkles aplenty. Reflecting the old-meets-new theme of the concert, the set and décor will mix the traditions of Christmases past with the flamboyance and fun of today’s festive season. It’s sure to be a truly memorable and not so Silent Night!

Find out more and book tickets
Email ThisBlogThis!Share to TwitterShare to Facebook