News - Get Dave To Nashville 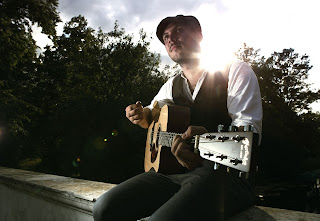 How do you raise enough money to cross the Atlantic to record an album without using a recognised crowdfunder site? You do what London-based singer/songwriter Dave Giles is doing...

Dave Giles is a man on a mission. Unlike the Blues Brothers it’s not a Mission from God but it is a mission that is very dear to him: To celebrate ten years as a full time singer/songwriter, he decided to go to Nashville to record his second album. So he needed to raise money... a LOT of money, £20,000 to be exact. All without using a crowdfunding platform. This piqued our interest here at AlbieMedia, as we always want to support those indie creatives who want to forge their own path to achieve their dreams, so we asked questions.

The first question being, why Nashville? And Dave’s answer was simple “A lot of my favourite artists have made their seminal albums in Nashville and it's not called music city for no reason! It's also been five years since my own first album Love, Life, Loss and Tea so it seems like the perfect time to take on such a project. Although I don't intend on making a country music record [while I'm there,] it's going to be more Americana with an English accent.”

So what kind of music does Dave Giles create if it’s not country? That’s something that he says he always struggles to answer. “It’s not that I have created a new genre, it’s just that I like to do lots of different things. I can be folk, blues, rock, pop, country and even a bit jazzy at times. Lyrically, I want to tell stories, and often they are very personal. I really do wear my heart on my sleeve.”

Then we felt we had to ask him why he’s not using Kickstarter or IndieGoGo or the likes. Dave said “I don't actually like the "official" crowdfunding sites. I don't like that they take a decent percentage chunk and there's no guarantee that I'll be exposed to a new audience as a result.” Instead he’s been raising funds using his own website and social media as a base. He explained, “I've been running [the fundraiser] from http://www.davejgiles.com/nashville and then, when people buy something or contribute somehow, I send them a link to a private Facebook group where I'm putting exclusive content. I don't really see how this is any different than having kickstarter or pledge site doing that for me.”

Dave really is working hard towards achieving his goal. All the money he’s made from his music, whether bought or streamed, goes into the pot, as have all the profits from this year's tour and donations from his fans. Last week he also released a live album on Bandcamp, recorded as part of his Get Dave to Nashville tour and all money from it is heading straight for the fund too. Click on the cover below to have a listen.


There’s not just music on offer either. To raise even more funds, Dave has a full range of merchandise available from bags and badges to T-shirts and TEA (Yes really! Dave has his own blend of tea for sale, how cool is that?!) as well as offering unique, one-off items like personalised songs and hand written lyric sheets.

And he’s nearly there, both in terms of time and money, as the target amount and deadline date are creeping very close. “I've currently raised nearly £17,500 of my £20,000 target that I set on April 6th,” Dave told us. “My flights are booked for January 3rd and I've got a producer and musicians booked as well as a studio. So it's now happening, I'm just trying to get the last little bit of my target, and hopefully a little bit more so I have leeway when I’m out there to book other musicians if we need them.”

Listen to one of his more recent songs, The Storm, below and, if you like what you hear, visit Dave’s website at  http://www.davejgiles.com/nashville to find out more about his planned trip and buy some tea (or T-shirts or music or whatever) to give him a helping hand.