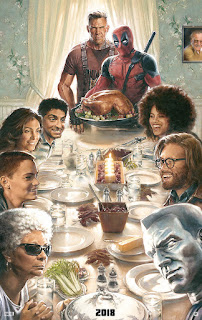 Why are we talking about the new Deadpool trailer on AlbieMedia? I mean, have you WATCHED the trailer yet?..

After surviving a near fatal bovine attack, a disfigured cafeteria chef (Wade Wilson) struggles to fulfill his dream of becoming Mayberry’s hottest bartender while also learning to cope with his lost sense of taste. Searching to regain his spice for life, as well as a flux capacitor, Wade must battle ninjas, the yakuza, and a pack of sexually aggressive canines, as he journeys around the world to discover the importance of family, friendship, and flavor – finding a new taste for adventure and earning the coveted coffee mug title of World’s Best Lover.

Erm... yes. OK. But ignoring that synopsis, just for the moment, we need to have a word about the teaser trailer that was released yesterday for the film.

Now, being arty types you will already know about Bob Ross. If you don't, a quick explanation. Bob Ross, with his trademark hair and soft spoken voice, was the creator and host of The Joy of Painting, a TV programme that aired all over the world from 1983 to 1994 when he became too ill with cancer to continue. In the half hour episodes, he used to create an oil painting, pretty much from scratch to completion, in a technique called "wet on wet" painting, which basically meant not letting each layer of paint dry before the next one was added. He started with a limited colour palette, whose colours were always listed across the bottom of the screen, and the paintings he created were always lovely chocolate-boxy mountain landscapes or cabin scenes, much influenced by time he spent in Alaska. The thing that differentiated Bob Ross from other "instructional painter" programmes at the time though was his gentle, non patronising presenting style. The trees were always "happy little trees" for example there were no mistakes, only "happy accidents" and his giggle as he "beat his brushes" on the leg of the easel was infectious. Quite often there would be a little woodland friend visiting with him for a moment, a squirrel or an owl maybe, and it would feel oh so Disney-like and idyllic, making the programmes indeed a Joy to watch, whether or not you ever picked up a paint brush.

And now, we come to "Wet on Wet," the teaser trailer for Deadpool. To use the modern parlance "I can't even..." Oh, and remember to take note of the paint colours!