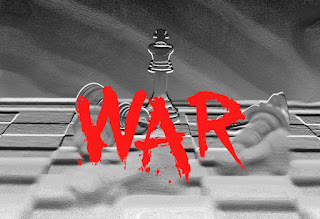 To tie in with War Day over on The DreamCage today, Susan Omand picks five songs about war...

I could say that I had planned it like this, that it took days of research and hunting through many many songs but I want to be upfront about this - I had chosen the 5 songs just because I liked them before I realised something. I seem to have picked songs from conflicts in 5 different decades (even though the songs were written later in most cases.) So let's just say that it actually WAS planned like that and run with the order anyway shall we?

In case you didn't know, Enola Gay was the name of the American plane that dropped the bomb on Hiroshima.

If you have never seen M.A.S.H. (the film or the TV series about a Mobile Army Surgical Hospital in the Korean War) please do yourselves a favour and find it.

There are so many anti-war songs about Vietnam but, for me, none quite so hard hitting as this one.

This song is not a rebel song. The troubles in Northern Ireland provide the backdrop for a song about the futility of fighting that could just as easily be applied to any political/religious war.

Well, for The Cold War it really couldn't be anything other than a song whose video has two of the world's most powerful leaders at the time slugging it out in a boxing ring.