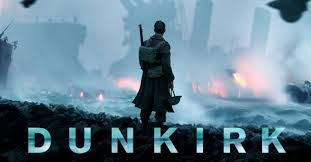 VentSpleen looks at the collaborating genius of Nolan and Zimmer in soundtracking one of the most epic films about World War II in Dunkirk...

Everyone is heralding it as the greatest modern day historical blockbuster since the last greatest modern day historical blockbuster. Conversely Nolan's critics are pulling it apart as boring and self indulgent. I think it depends what you are expecting from the film prior to watching. If you need 'Dunkirk' to be an action packed, high adrenaline, John Woo helmed extravaganza then you will be disappointed. Nolan has opted to tell the true life events that occurred on a French beach with an air of believability and, as a result, there is little room for Jason Statham being all Stathamy onscreen. Much has been made of Nolan's decision to film on 70mm and of his view that the events themselves should take centre stage. To everyone's huge relief 'Dunkirk' is no British version of Pearl Harbour and there is no fictional romantic sub story woven into the historical retelling. All you need to know is it works! Land, Sea and Sky you are taken from the cinema to a dogfight between Spitfire and German bomber, to the beaten and silent troops desperately waiting to be saved or to the small fishing boats who have been requisitioned to rescue the stranded army.

Google search 'Dunkirk' and you will find pages of reviews celebrating the cinematic brilliance of Nolan but for me the film is a celebration of a musical collaboration that is as dynamic, as exciting as Williams and Spielberg. I want to focus on the sheer and unmatched genius of Hans Zimmer and what happens when he works with Nolan. Dunkirk is not just a cinematic work of art but it also marks the peak and highest point in Zimmer's already astounding musical career.

I already believed that Zimmer was the greatest living film composer since Williams and that view is evidenced by a back catalogue which just shouts brilliance. His stirring work for the award winning TV series The Pacific could be the reason he was a perfect fit for Dunkirk but I like to think that he will always compose for Nolan. His work on the Batman trilogy surely rivals Elfman for originality and a divine use of the orchestra. Don't like that? what about his anthemic work for Pirates of the Caribbean or, back with Nolan again for the memorable and visually mind bending Inception. Earlier back still and remember the music from The Rock, Days of Thunder or Green Card? All Zimmer and whilst they all show his trade mark brilliance ( I love how he often turns the tuned string sections into a percussive powerhouse) His scoring is unrelenting in its underpinning of key emotive sequences (remember the intense and nightmarish string screams during Dark Knight's intense 'Joker' driven scenes. Zimmer has given us some of the most recognisable scores in modern day cinema (Gladiator, Crimson Tide) but he is so attune with Nolan's cinematic heartbeat that Dunkirk brings out something new. It has its roots with Inception and with The Dark Knight but has evolved into something so breathtaking it should have every music nerd clamouring for his next move.

For 'Dunkirk', Zimmer doesn't just score he does something completely different, something that separates him from a classical composer. Zimmer moulds and sculptures music that fits so closely to a film it becomes an audio second skin. What you get with Hans Zimmer is far more than music, he soundscapes.

'Dunkirk' is a perfect example of soundscaping in that, it has no real memorable tracking or musical compository event. It doesn't have a "Raiders March" or an anthem. When the aerial dogfight is underway there is no building modern day version of Spitfire Prelude or The Great Escape. The sinking of one of the huge destroyers could have been heralded by a clamouring of strings and brass falling away as the ship itself hits the ocean bed. The tragedy of lost life and the penalty being paid for arguably the worst military faux pas in modern day warfare demands a huge heart wrenching theme. Imagine the depths musically and by contrast the soaring that could have been achieved as Brannagh's General catches the first glimpse of salvation by fishing trawler. Yes, 'Dunkirk' demands this sort of scoring but Zimmer refuses to deliver. Instead his scoring is atmospheric, sparse and focuses around one thing, the passing of time denoted by the ticking of a pocket watch. Nolan's own pocket watch which is digitally sped up and slowed down as the film needs. Zimmer's work on 'Dunkirk' is a perfect symphony of electronic noise and sound, synth bass and pads with high tones of strings and brass. Zimmer's love of percussion takes on a whole new level of importance as time slows down on the beaches and in the waters but speeds up at the sinking of ship after ship. It's like Zimmer has been possessed by Vangelis but this is an angry Vangelis who isn't going to be told what to compose anymore, rebel Vangelis with a cause!

Nolan wanted the events and the evacuation of 330,000 troops from the vast Dunkirk beach to be at the centre of his film and there is no distraction whether with over sentimental scripting or over indulgent musical scoring. 'Supermarine' (the track embedded above) is breathtaking in its range and composition but you barely hear more than the occasional phrase through the film. It's like Zimmer and Nolan are forcing the audience to relive every bullet, every moment and every death without mercy or let up. 'Dunkirk' grabs hold of you by the neck and doesn't let go, in fact it is a grip that threatens to throttle the life out of you.

Zimmer's astounding re imagining of Elgar's Nimrod (Enigma Variations) is the theme that lingers in the memory. When it plays as the backdrop to Churchill's rousing "Beaches" speech to Parliament you have the heartbeat of 'Dunkirk'. As Harry Styles character memorably points out "We didn't do anything, we just survived" and "yes, and that is enough" comes the reply. At a time when belief and a lack of compassion for others seems hard to come by perhaps 'Dunkirk' teaches us far more than a lesson from history. To stand idly by whilst others suffer and die is not something that should ever be an option. Turning our backs or burying our heads in the sand will not avert a tragedy and it is by courageous action of the few that the many are saved.

I left the cinema with tears streaming down my cheeks and so very grateful for the lives given by the braves souls that fought in WWII but also for the unfailing strength and heart of the fishermen that braved the seas and German bombs to rescue British, French and Dutch troops from Dunkirk. Lest we forget. THANK YOU!