Turn That Noise Down - Bruce Springsteen 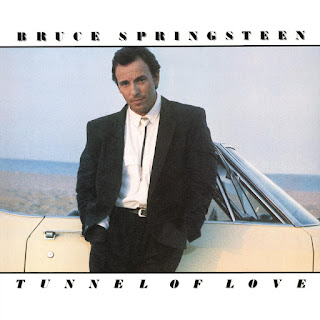 So many well-known albums turn 30 this year and Steve Taylor-Bryant and Susan Omand travel back to 1987 to revisit some of the sounds of their youth that made parents shout "Turn that noise down!" This week Steve heads into the Tunnel of Love...

The Boss, Bruce Springsteen, has always been a huge part of my musical upbringing. From early E Street Band stuff through the more commercial material, to some of the greatest storytelling songs in the 1990's, Springsteen has always been there. I own copious amounts of records, cassette tapes, CDs, and DVDs of performances and studio work. However, I didn't own Tunnel of Love until the other week, it just seemed to pass me by, how self involved am I? It missed me first time around though and so I sat to listen for the first time, wondering where in his phases it would fit. Is it a continuation of Born in the U.S.A and more chart oriented tracks, not that Born was that commercial once you get past the hits, or is it the start of the journey into the likes of Human Touch and Lucky Town. Well it's sort of everything and, whilst I love it, I can totally see why it may have passed me by first time.

It has stadium filling sounds like Spare Parts, that you can imagine Springsteen snarling down his microphone and throwing his Fender guitar around to, and more subtle story tracks like All That Heaven Will Allow, and that's just in the first four album songs. The more acoustic, almost preaching sound of Cautious Man breaks the album up nicely, and Walk Like a Man, in my opinion the weakest song on the album, brings the first half to a close before the title track kicks in with its really 80's intro followed by the calming horns which lead into what comes across as a Springsteen tribute act. That's not a criticism by the way, it just seemed to be a medley of all things Bruce crammed into 3.18 minutes. Two Faces starts with some beautiful plucked acoustic strings and Springsteen's voice full of bluesy emotion. As ballads go it's a corker. Brilliant Disguise is probably the most famous track on the album and fits into any Springsteen show or compilation, musically appealing and wonderful to listen to. One Step Up and the penultimate song, When You're Alone are steady album fillers and Valentines Day ends the album being my favourite track on it. It has that Streets of Philadelphia feel to it that just suits both Springsteen's voice and the era.

Tunnel of Love is not the best of Bruce Springsteen by a long shot but it's a solid release from a singer and songwriter that on his worst day is better than most.