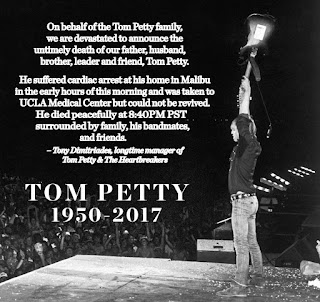 After the sad news, confirmed by his manager early this morning, of the death of Tom Petty, Susan Omand picks one of his songs for Song of the Day...


Which song to pick though? There were so many. On social media, as people pay their own heartfelt tributes to the musical greatness of a man, most people have gone for Free Fallin', a lot are Learning to Fly and a few who Won't Back Down. There's also a few American Girls, the song that he closed his set with on his recent US tour. And that's before you get to the Travellin' Wilbury's back catalogue.

Although these are great songs, I chose something completely different, something that spoke to me. Into the Great Wide Open.