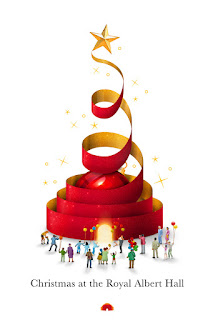 The design has now been revealed for the Royal Albert Hall Christmas promotional posters for NEXT year...

The brief was for new, captivating artwork that celebrates the Christmas spirit and the iconic elements and characteristics of the Royal Albert Hall, and they have selected three works that especially stood out.

The Selected Artist is Breitner Arango, from Colombia whose work (pictured above) will be adapted into the posters and adverts for the 2018 Christmas season at the Royal Albert Hall.

Louise Halliday, Head of Marketing and Communications, said “We chose Breitner’s piece because his work balances simplicity with Christmas magic, and uses emotive festive elements while building on the Hall’s identity and image. The design is also adaptable to a variety of digital and physical formats, and manages to convey the emotion we were looking for in a modern and refreshing style.”

There were two other finalists, Darya Shnykina, from Russia, and Maryna Gargai, from Ukraine. 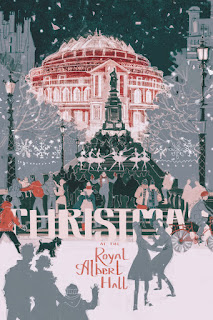 ‘The process of creating this artwork was a wonderful, even magical time for me. I really tried to bring the special Christmas atmosphere into it. And though it was late august, I could really feel the snow falling outside. I finished this submission with the warmest feeling of affection and was very glad to become a finalist!’ 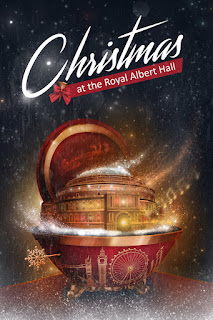 Music boxes have always gave me magical impressions and feelings of cosiness and warmth. Considering that the Hall is an incredibly beautiful, world-famous concert hall, I thought there would also be semantic content in such an image. I was enjoying every moment of painting it and working on all these details!’

The finalists and winner join a nearly 150 year history of artistic commissions, acquisitions, and exhibitions at the Hall, from Dutch masters to British graffiti artists, via Pablo Picasso, Sir Peter Blake, Miles Davis, and artwork from 1960s psychedelia to interwar nationalism.

In 1937, Pablo Picasso designed the programme cover for a mass rally in opposition to General Franco and the Nationalist Army, while in 2014, the ‘Godfather of British Pop Art’ Sir Peter Blake unveiled a specially-commissioned mural entitled Appearing at the Royal Albert Hall.

Two of the Hall’s most iconic artistic features were created through commissions that involved technical and artistic innovation – the 5,200 square foot mosaic frieze The Triumph of Arts and Letters, and the Loading Bay graffiti collage LOAD.

While the frieze was created in 1867 by seven distinguished members of the Royal Academy of the Arts, LOAD was a 2009 project by some of the UK’s best young graffiti artists. Both works embody the Hall’s remit of sponsoring and leading modern arts and science.

The global artist community of Talenthouse has now allowed the Hall to extend this legacy of pioneering artwork, by opening its doors to submissions from artists around the world.