News - The Road Through the Rocks 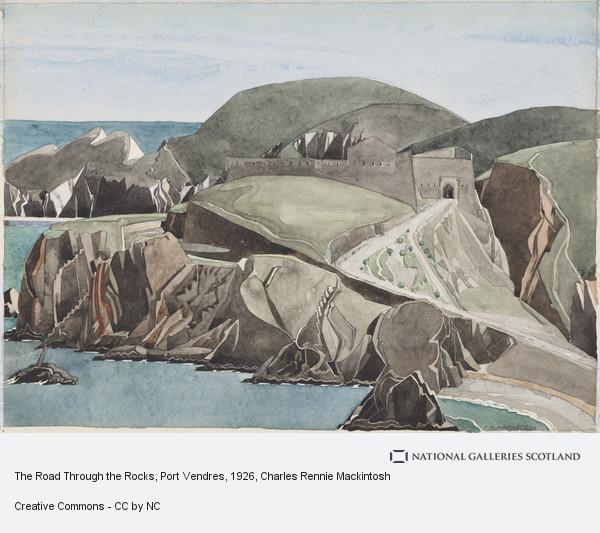 A rare watercolour by the world-renowned artist and architect Charles Rennie Mackintosh (1868-1928) is now on display at the Scottish National Gallery...

The Road Through the Rocks, a beautiful view of a southern French landscape painted between 1926 and 1927, was purchased at the Edinburgh auction house Lyon & Turnbull for £65,000. It will feature in a display at the Gallery which runs from until mid-January 2018, coinciding with the 150th anniversary celebrations of the acclaimed artist’s birth.

Better known as one of the most original and creative architect-designers of the 1890s and early 1900s, Charles Rennie Mackintosh was also an accomplished watercolourist.

His career as an architect declined during the First World War and in years immediately afterwards. In 1923 he and his wife, the artist Margaret Macdonald Mackintosh (1864-1933) decided to move to the south of France and concentrate on watercolour painting. Over the next four years Mackintosh produced a series of some 40 watercolours, depicting the mountains, farms, hill towns, ports and flora of the Pyrénées-Orientales and the coast of Roussillon, in the far south west of France. With their brilliant light and colour, meticulous execution and powerful design, these watercolours convey Mackintosh’s extraordinary eye for nature’s patterns and the structure of organic forms. Utterly distinctive in style, they also demonstrate the originality of his vision and his complete command of the watercolour medium.

Mackintosh had drawn and painted from the outset of his career; he won first prize at a student exhibition at Glasgow School of Art (GSoA) in 1891. Sketching buildings and making showpiece perspective drawings was a vital part of his practice as an architect and he also painted richly detailed and observed botanical drawings. He made a small number of landscape watercolours in Suffolk in 1914 and on holiday in Dorset in 1920, but the French watercolours represent his first sustained landscape and watercolour painting campaign. As a group they bring together his passionate interest in nature, in buildings and in painting and represent an extraordinary creative development late in his career.

The Mackintoshes clearly fell in love with the Roussillon countryside; Margaret wrote after a visit to London in 1924 that, “we came on here – to this lovely rose-coloured land and we were glad to be back again in its warmth and sun”. They initially stayed in the mountain spa town of Amélie-les-Bains, later travelling to the fishing village of Collioure and its near neighbour, the busy working port of Port Vendres. By 1925 they had established a routine of summering in the mountains and spending the rest of the year on the coast at Port Vendres.

Although they initially rented studios, these were later given up and Mackintosh worked outdoors. Carrying the minimum of equipment and dependent on fine weather, he would scramble across the rocky hillsides in search of the best vantage points, often having to take shelter from the fierce coastal winds of the area. He worked slowly, sometimes spending weeks on a drawing; he wrote, “I go very slow because I have so many problems to solve”. He was ambitious for his paintings, constantly striving for improvement, writing that, “I find that each of my drawings has something in them but none of them have everything. This must be remedied”.

The Road Through the Rocks depicts Fort Mailly, an eighteenth century fort built to guard the entrance to the harbour at Port Vendres. Mackintosh was fascinated by the fort, with its slab-like walls lying just above the rocky coastline, and painted it at least four times from different viewpoints, exploring its setting and relationship to the landscape. This is probably the earliest of the four views of Fort Mailly; the undulating hills and sinuous, serrated rock formations contrast with the angular bulk of the fort and the flat calm of the sea. The road referred to in the title is shown deep in shadow, cutting through the rocky headland to the right of the fortress. As ever Mackintosh omits any human presence from the scene; the angular forms of the rocks and the play of intense light and shadow create a feeling of organic movement and dynamism in what is otherwise a landscape of crystalline stillness.

The Road Through the Rocks was exhibited at the Mackintosh Memorial Exhibition in Glasgow in 1933 and was later in the collection of Professor Thomas Howarth, an eminent Mackintosh scholar and collector. The National Galleries’ acquisition of The Road Through the Rocks was partly funded by the James Cowan Smith Bequest Fund. Cowan Smith bequeathed £55,000 to the Scottish National Gallery in 1919, with the intention that the interest on this money be used to purchase works of art. Over the last century the Cowan Smith Fund has enabled the purchase of such masterpieces as John Constable’s The Vale of Dedham, John Singer Sargent’s Lady Agnew of Lochnaw and Jean-Baptiste Siméon Chardin’s A Vase of Flowers, among others.

Sir John Leighton, Director-General of the National Galleries of Scotland, said: “Mackintosh is one of the greatest of all Scotland’s artists and architects and this is a very refined and beautifully composed watercolour which demonstrates his sophisticated engagement with European landscapes. It is especially pleasing that it has been possible to secure such a rare work in good condition for the national collection in time for all the celebrations that will mark the 150th anniversary of his birth.”

Find out more on the National Galleries of Scotland website