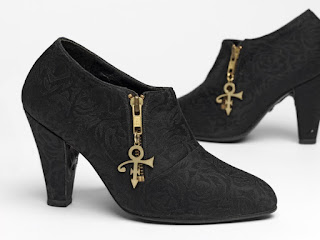 The Victoria and Albert Museum in London has acquired a pair of black, satin, floral patterned shoes designed for and worn by Prince...

The shoes’ zips use Prince’s iconic logo as the tag, meaning ‘love symbol #2’, which Prince famously changed his name to in 1993. This unique design resembles the Mars and Venues symbols signifying male and female as one

These shoes demonstrate the important role costume plays in the iconography of the contemporary rock and pop performer. Known for his energetic stage leaps, Prince’s shoes had special metal braces fitted between the heel and outersole as reinforcements to sustain the physicality of his performance. This creative solution, almost invisible to the audience’s eye, supports the shoe’s structure and ensures no discomfort to the wearer, which is testament to the design and craft skills necessary for a world class performer. The V&A is the leading museum for art, design and performance, and the shoes will join the V&A’s National Collection of Performing Arts that houses rock and pop costumes such as outfits designed for and worn by Elton John, Mick Jagger and the Beatles.

Geoffrey Marsh, Director the V&A’s Theatre and Performance Collections, said, “This important acquisition not only records the dedication of one of the world’s great performers but highlights the range of design and craft skills necessary for large stage shows. The UK is a centre for creative skills and a prime purpose of the V&A is to inspire visitors to discover their own creativity and the opportunities that offers. We hope seeing these shoes will encourage people to consider the creative opportunities of shoe design as a career, as well as educate visitors on how skilled craftsmanship and design can be used to support the art of performance.”

The shoes are now on public display in the Theatre and Performance gallery of the V&A .

Shoes designed for and worn by Prince, circa. 1994 © The Victoria and Albert Museum, London
Email ThisBlogThis!Share to TwitterShare to Facebook