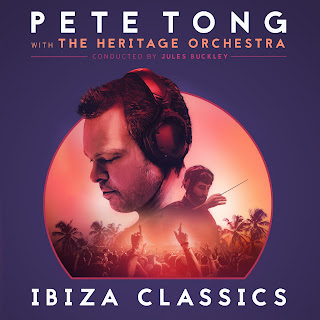 Will it all go a bit Pete Tong as the acclaimed DJ goes orchestral with a new album in December...

Ibiza Classics is the follow-up to the 2016 UK Number One album, Pete Tong Classic House, a landmark record that saw the dance pioneer rework classic Ibiza dance tunes with an orchestra. A collaboration with arranger and conductor Jules Buckley, Classic House was the UK's bestselling debut in 2016, with more than 270,000 copies sold to date. For Ibiza Classics, Tong combines the euphoric experience of touring Classic House alongside Buckley and the Heritage Orchestra with knowledge accrued over four decades immersed in dance music culture. Following last year's sold out UK arena tour, a run of international arena shows is upcoming, including the Hollywood Bowl in Los Angeles on Thursday, November 9th, two Australian dates, and two December dates at The O2 in London.

"Watching Jules and these fantastically classically-trained musicians and this arena full of people partying, I was thinking, 'We need to do this again'," says Tong. "The question was: how could we do it again, but differently?"

The answer is Ibiza Classics. The Classic House album sought to capture something that had already taken place – kickstarted by the celebrated one-off show at London's Royal Albert Hall to mark 20 years of BBC Radio 1 Ibiza coverage. From a clean slate, Tong could draw on his prestigious contact book for Ibiza Classics, reaching out to the likes of Seal, Craig David, Candi Staton, and Jessie Ware, as well as rising stars Becky Hill and Raye, to name but a few, giving the new album a more featured-artists feel, as well.

The bulk of the Ibiza Classics album was recorded at producer Mark Ralph's studio in west Londonand programmer Dennis White's studio in Putney. "They were like the Creative Control Centres of the thing," says Tong. "Last time it was performance first, record second, but this time I started the project from a programming and arrangement perspective with Mark and Dennis. Then we had the Heritage Orchestra's band going into the studio and playing on top of what we did and adding in the live elements." For the final piece of the puzzle, Buckley arranged the tracks for the wider, 65-piece Heritage Orchestra, recording with them over five days in London's Air Studios.

Never one to rest on past achievements, Pete Tong is making music as exhilarating as anything he's done before. "It feels appropriate to be celebrating the legacy of dance music," he says. "This is the soundtrack to so many people's lives."

Pete Tong Ibiza Classics with The Heritage Orchestra, directed by Chris Wheeler and conducted by Jules Buckley, will be released December 1st by UMe on CD, vinyl LP, and digital audio.


Pete Tong Ibiza Classics is now available for preorder, with the track "Sing It Back" immediately available.