News - Nile Rodgers: How To Make It In The Music Business 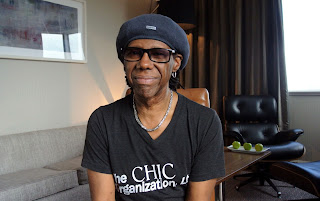 Nile Rodgers will guide viewers through his musical legacy in a new three-part series starting tomorrow evening on BBC Four...

The weekly series will take a look at the career of the multiple Grammy-award winner and Rock and Roll Hall of Famer, as Nile Rodgers shares the secrets of his success, what it takes to make it to the very top of the music industry and how to stay relevant decade after decade.

In tomorrow's episode, Nile reveals the source of inspiration for many of his songs, including the story of how the iconic nightclub Studio 54 turned him away at the door, prompting him to write the classic disco hit, Le Freak. Nile also speaks candidly about his troubled childhood and how music became both his companion and saviour.

Nile Rodgers says: “When I was learning my craft I was happy to pick up every nugget of knowledge that would help me develop into a professional. I quickly realised that I needed to figure out what worked for me. Understanding risks, rewards, benefits and failures was imperative to have a lifelong career in music. For myself, nothing was a better teacher than failure, and success wasn't as satisfying as I'd thought, because I needed to do it over and over again to know whether it was real - or just a fluke.”

Throughout the series Nile discusses success and how to embrace failure, which he experienced in the '80s when the ‘death of disco’ forced him off the stage and into the recording studio. Nile tells how he survived the downward spiral of drugs, alcohol and overwork, and reinvented himself - which led to working with a new generation of artists, including Daft Punk, Laura Mvula and Keith Urban.

The final episode exclusively features the new and unreleased Chic record, I Believe In Music, from Chic’s forthcoming new album It’s About Time. The new song sums up Nile’s personal philosophy towards the art form that has dominated his life and viewers can hear it for the first time on BBC Four.

Duran Duran's Nick Rhodes describes Nile’s use of complex chord patterns, and recalls the band’s highly successful collaboration on The Reflex and their critically-acclaimed album Notorious. The series also features Kathy Sledge of Sister Sledge, who recalls the joyous way Nile worked with her and her sisters to produce their internationally successful album We Are Family and the hit single, He’s The Greatest Dancer.

Jan Younghusband, Head of Music TV Commissioning, said “Nile Rodgers gives us the inside track into working in the music business and talks candidly about his incredible experiences working with great artists - from Madonna to David Bowie, Laura Mvula and Daft Punk. Nile is a force in the industry and this new series is an extraordinary insight into how it works, in a way only he would know.”