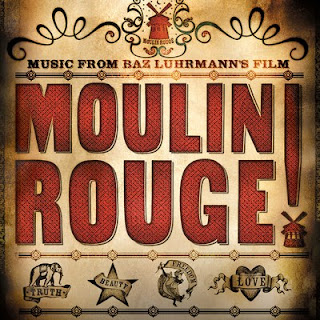 In addition to its standard black-vinyl release, the anniversary LP of the 2001 soundtrack which accompanied the release of his acclaimed motion picture will also be released in a limited coloured-vinyl edition.

The film, a modern classic, is widely regarded as a reinvention of the film musical. Before the popularization of the mash-up, the "Elephant Love Medley" brought together a distillation of the twentieth century's great songs into an argument-in-song between the Nicole Kidman and Ewan McGregor. The album purposefully brought together an eclectic cross-section of artists and music creators to make a definitive musical statement at the dawn of the new millennium. Where else can one hear the likes of Bono, Rufus Wainwright, Beck, David Bowie, Jose Feliciano, and Fatboy Slim all joining in a unified musical gesture?

"We wanted to celebrate the great songs of the twentieth century as a lens through which to view the world of the turn-of-the-century Paris Belle Epoque, while remaining visceral and relevant to the audience watching the film in 2001." - Baz Luhrmann

But it is best known for its first single, "Lady Marmalade," re-recorded by Christina Aguilera, Lil' Kim, Mya and P!nk, produced by Missy Elliott and writing partner Rockwilder, with the lyrics transposing the original location from New Orleans to the title Paris nightclub. "Lady Marmalade" reached #1 in its eighth week on the U.S. Billboard Hot 100, spending five weeks at the top of the chart, the third airplay-only song in Billboard chart history to hit #1 without being released as a commercially available single. The soundtrack album debuted at #5, and peaked at #3 on the Billboard 200, while topping the charts in Australia and New Zealand. It eventually reached #1 on the Top Soundtracks chart and was certified in April, 2002, double-platinum.

The song earned a 2002 Grammy Award for Best Pop Collaboration with Vocals and MTV Video Music Awards for Best Video of the Year and Best Video from a Film, along with nominations for Best Dance Video, Best Pop Video, Best Choreography and Best Art Direction. The album was Grammy-nominated in the category of Best Compilation Soundtrack Album for a Motion Picture, Television or Other Visual Media. Luhrmann (along with music supervisor Anton Monsted, under the music production pseudonym BLAM), is a co-producer on cast recordings on the album. Luhrmann, along with music director Marius DeVries, oversaw all of the cast recordings for the film during pre-production.