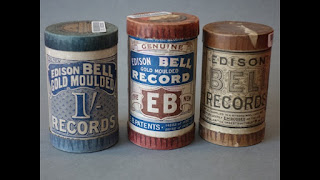 Visitors to The British Library will have the opportunity to hear an eclectic mix of sounds from the archive including many rare and unpublished recordings in Listen:140 Years of Recorded Sound...

Reflecting the importance of sound in recording our lives and cultural heritage, and the impact of radio in the 20th century, there will be items on display from the Library's rarely-seen collection of records, players and recorders, exploring how technology has transformed our listening experience.

This free exhibition will also highlight key moments and figures in the history of recorded sound, including the birth of the BBC, the rise of the pop charts, and 16-year-old Alfred Taylor, whose ‘Wireless Log’ in 1922 can be compared to modern-day vloggers and YouTubers.

The exhibition will also feature a specially-commissioned sound installation by musician and former British Library composer-in-residence Aleks Kolkowski, which takes its inspiration from the Wireless Log and Minutes Book by 16 year-old radio enthusiast Alfred Taylor (1922, British Library Collection). The work uses archival recordings from the British Library and is channelled through antiquated radio horn loudspeakers to reproduce a near representation of historical radio, as it was heard in its early years.

Aleks said of the installation, “It’s been a great privilege to have unfettered access to the British Library’s sound collections and to work so closely with the British Library’s Broadcast Radio curator, Paul Wilson, in compiling the selection of historic recordings from which the sound montage is based. I hope that the work conveys a compelling impression of the sounds of radio during the first decade of public broadcasting.”

Steve Cleary, Lead Curator of Literary and Creative Recordings at the British Library, said of the exhibition, “We’re delighted to be opening up our sound archive with Listen: 140 Years of Recorded Sound, and do something a little bit different with our very first sound-focused exhibition. Preserving the nation’s sounds is just as important to us as preserving the nation’s words, and we hope to surprise and intrigue visitors to the exhibition with examples of unusual recordings and sound technology over the past 140 years.”

The exhibition is part of the British Library’s Season of Sound, delving into its extraordinary collection of over 6.5 million recordings of speech, music, wildlife and the environment, from the 1880s to the present day. This exhibition and events programme will look back over 140 years of recorded sound and explore how important sound has been to our lives since the invention of the phonograph in 1877.

The Season of Sound events programme will run until late March 2018, with events still to be announced.

Happy Hour: Listening Pleasures on a Friday Evening
Fridays from 17.00 – 18.00
Free / Entrance Hall
Be transported to a rainforest, revisit musical treasures or experience rare recordings for the first time, played in hi-fidelity through Bowers & Wilkins Sound System, all within our Entrance Hall. Guest selectors will open your ears and mind in these regular Friday evening sound experiences. See our website for the full programme.

Late at the Library: The Radiophonic Workshop and Guests
Friday 13 October 19.30 – 23.00
£22 / £20 / £18 / Entrance Hall.
As the in-house composers of music and effects for the BBC, the Radiophonic Workshop created the sonic backdrops for Doctor Who, The Hitchhikers Guide to the Galaxy, Tomorrow’s World and countless others, and are hugely influential. Now they’re back, performing classic material as well as new album Burials in Several Earths with special guest Martyn Ware (Heaven 17, Human League)With visuals by DFuse and guset DJ Tom Middleton.

Soundhouses: The Radiophonic Workshop at 60
Friday 13 October 18.30 – 19.45
£25 / Knowledge Centre
The inside story of the electronic production house. Ticket price includes entrance to the Late event.

Sounds at the British Library: Meet the Curators
Monday 27 November 13.00 – 14.30
Free / Ticket required / Knowledge Centre
Music, voices, and the natural world: the British Library is home to over 6.5 million sound recordings made over 140 years. Get an insight into the collection at this free event and hear how Library plans to save and share even more.

Feeling Sound: Evelyn Glennie in Conversation with Colin Blakemore
Thursday 14 December 19.00 – 20.30
£12 / £10 / £8 / Knowledge Centre
Think hearing is just sound waves hitting your ear drums? Think again. Percussionist Evelyn Glennie’s unique connection to her music comes from having lost almost all of her hearing by the age of 12. She joins neuroscientist Colin Blakemore to discuss how we can all really listen.

For more information on the Season of Sound events programme, please visit www.bl.uk/whats-on
Email ThisBlogThis!Share to TwitterShare to Facebook