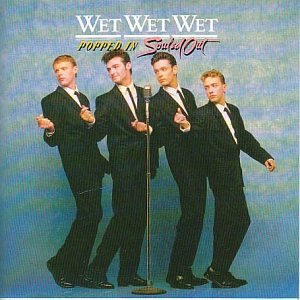 So many well-known albums turn 30 this year and Steve Taylor-Bryant and Susan Omand travel back to 1987 to revisit some of the sounds of their youth that made parents shout "Turn that noise down!" This week Susan relives a nightmare...

Ah the Wets. I heard Popped In Souled Out, their debut album, A LOT when it just came out because I was sharing a room in Dundee uni halls of residence with a girl from Bishopbriggs at the time who was just daft on Marti Pellow. And I mean to the point of covering a wall of our room with “*sigh* that smile” on various posters, pullouts and magazine cuttings. That smug Glaswegian grin still gives me nightmares, streetlights reflecting off those whiter than white teeth it was all I could see, like a flaming Cheshire Cat...

Anyway. When I saw it was on the list of albums with a 30th anniversary coming up I thought I’d give it another go, just to see if it was any better than I remember it first time out.

So? Well, yes and no. I don’t utterly hate it with the passion that constant, tortuous repetition goads you into. It’s actually OK, especially for a debut album, if a bit wallpapery in bits. There are the big hits of course, with Wishing I Was Lucky, Sweet Little Mystery, Angel Eyes and Temptation and they need no comment, they were big hits for a reason as they “worked” with the chart at the time and, as an album, it was only held off the top spot by Michael Jackson’s Bad when it was released so of course it was popular. Of the rest of the tracks though, there are a couple of gems among the filler. The intros to I Don’t Believe and Words of Wisdom are very cool, until they become just another pop song. And I absolutely love I Don’t Want to Be Lonely Tonight as a late night jazz standard that suits the mellow Pellow tones that just grew richer with his move into musical theatre. At the time though, East of the River is the kind of “sense of place” music they should have been producing more of to keep up with the likes of Deacon Blue, Goodbye Mr Mackenzie, Aztec Camera, Orange Juice, Danny Wilson and aaaall the other brilliant Scottish Pop bands around then.

I still think that was part of the problem with the Wets for me. They were a bit too generic to be the Scottish band that they were being promoted as. There was better out there for the niche market and I felt a bit like they really had sold out (no pun intended) in order to get the huge commercial gain.

I guess that’s what all the smiling was about.