Turn That Noise Down - Alice Cooper, Raise Your Fist and Yell 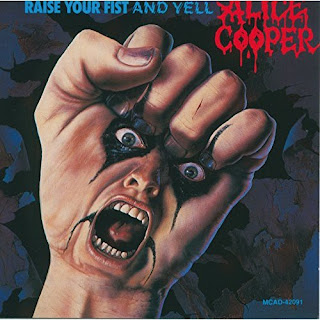 So many well-known albums turn 30 this year and Steve Taylor-Bryant and Susan Omand travel back to 1987 to revisit some of the sounds of their youth that made parents shout "Turn that noise down!" This week Steve Raises his Fist and Yells...


Freedom was my introduction to Alice Cooper and probably the heaviest song I'd listened to at the time, although I was 12 and liked Bros and Motley Crue so it wasn't difficult to be heavier to be honest. But, Freedom kicks off an album I've not listened to in years and, I'll be honest, after listening to better Alice Cooper albums over the years I was sceptical as to whether Raise Your Fist and Yell would hold up. It kind of did, but also didn't. Let me explain.

It shows a Cooper almost trying to get back to his Welcome to my Nightmare era with Chop, Chop, Chop and is pretty strong throughout. It certainly didn't seem like the precursor to Trash which is really not a great album. Roses on White Lace and Freedom stand up as my favourites on the record and Step on You and Lock Me Up seem timeless and like they'd fit most of Cooper's catalogue. It's just some of the album seems rushed and thrown together without much thought and the production values aren't great, most of tracks seem at first listen to missing a bass line and the drums go from driving and loud to almost muted.

Overall Raise Your Fist and Yell for me is more about my memories, as a 12 year old making his way into heavy metal it's brilliant but as someone now steeped in a loud history it's just not what it could and probably should have been.