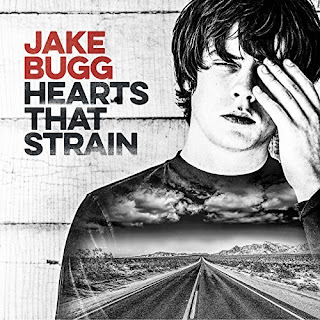 Susan Omand is trying to listen to some new music by randomly picking albums to listen to. Today is the turn of the new release from Jake Bugg, Hearts That Strain...

Should I have heard of Jake Bugg? On the hunt for something to listen to over the weekend I found out that he had released a new album called Hearts That Strain. Knowing nothing more than that, and wondering if Bugg was a stage name or if he got grief at school over it, I dove in.

The album of 11 tracks is only 35 minutes long – is it just me or are songs/albums getting shorter again? – so we’ll go track by track through my first listen.

How Soon The Dawn - Nice laid back, easy listening guitar starts the track. Bugg has a very unusual voice. Maybe distinctive is a better word because it’s not unpleasant it’s just... unusual – high, light,slightly nasal – reminds me of Neil Young in tone. Good close harmonies here too, with a nice sprinkling of keys and harmonica. Not a bad start (listen to it below).

Southern Rain - Listening to this on headphones, the Spanish guitar start cycles through the stereo giving a cool start to a very pleasant country-ish song. Yes, I would call it countryish, with a very 70’s American feel – think of the likes of Tom Petty or John Cougar Mellencamp and you have the idea.

In The Event of My Demise - I love the title of this one and it lives up to it. The vocals are very much to the fore and it has a great guitar backing. Could well be my favourite so far.

This Time - The tempo slows down a lot with a simple melody that does what you expect it to. Very cool use of strings in the backing though that adds depth.

Waiting [feat Noah Cyrus] - Aaargh a Cyrus! Yes, Noah Cyrus is another of the Billy Ray brigade and Miley’s sister. Give it a chance though, she has a good voice, reminiscent of Crystal Gayle, that fits the song, harmonises well with Buggs’ and this makes a nice country duet with some added brass and a strict tempo.

The Man on Stage - Oooh, nice piano and strings! A minor key sets the melancholy in this and you can really see this being a mid-gig song to change the mood.

Hearts That Strain - The title track and, I have no doubt, a future single, if it’s not one already, as it feels different to the rest of the album. This has less melody, with a harder edge to the backing, and the poetic lyrics come across so very well. It reminds me of The Waterboys. A very strong track that builds well.

Burn Alone - Oh this intro of this song reminds me of something and I can’t think what it is. It’s the twangy guitar, the almost monotone (but not in a bad way) lyrics... Coconut! The Harry Nillson song (if you know Reservoir Dogs or watched Bones, you know the song). That’s it! Burn Alone builds more though and becomes very danceable, with a Doors-ish vibe to it.

Indigo Blue - Piano, strings and wah-wah guitar make the backing to this almost psychedelic sounding track. Not my favourite as it sounds a bit too “post-Maharishi Beatles” for my taste but yes others will enjoy it.

Bigger Lover - Back to the laid back easy-listening 70’s sound and an interesting counterpoint with very fast lyrics in the verse over a languid backing. This settles down and, after a couple of listens, you’ll be humming along to the chorus.

Every Colour in the World - This is well placed on the album as it’s very much an end of the night song and builds well, doing what you want it to do when you want it to. A nice mix of steel guitar and piano in the backing too.

Looking back over what I’ve written, “nice” comes up A LOT and that’s really what it is, a nice little album that you can stick on in the background while you’re doing something else. To be honest, it’s the kind of thing that you can listen to when your parents visit and they'd not call it “noise”. I don’t want to do this album a disservice though – “nice” is not a bad thing at all. OK so there’s no edge to the music and nothing overly challenging or controversial in the lyrics but I really enjoyed it on first listen and will look for more of his work (Bugg is a stage name btw, I looked him up). It’s country, it’s hippy, it’s easy listening. It’s very 70’s, very ,very American sounding (even though he’s English) and if your record collection contains things like Tom Petty, Harry Nillson, even The Eagles or Harvest-Moon era Neil Young, this would fit in to it very well indeed.