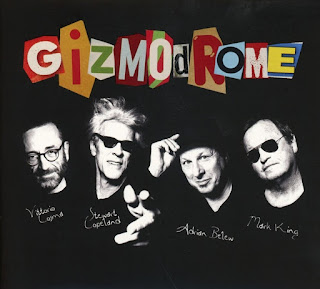 Steve Taylor-Bryant discovers the debut album from a supergroup you didn't know you needed until now, Gizmodrome...

This album will split opinion and is not for everyone. I completely understand where some of its detractors are coming from but, honestly, Gizmodrome is the best thing I’ve listened to this year. The Police drummer and soundtrack composer Stewart Copeland is joined by Italian prog rock keyboardist Vittoria Cosma of PFM fame, ex Zappa and King Crimson guitarist Adrian Belew and the best slap bass player of his ‘funkin’ generation in Level 42’s Mark King and, unsurprisingly, you get all these influences coming through on some musically excellent but different sounding tracks.

The album kicks off in style with Zombies in the Mall, a throwback to maybe later Police and mid fame Level 42, and the album just builds from there with some eclectic choices of instrument and vocal on just about every track. There are some stand out tunes on Gizmodrome but you will have to get to grips with Stewart Copeland as your surprise choice of lead vocalist, which seems to be most people’s contentious point, but I loved his vocal. He seems to cross eighties Peter Gabriel with a country star wanting to turn ironic comedian and it just sounds like it works, especially in tracks like Spin This, where choruses and backing are provided by the comforting, and more professional sounding, King.

There are some brave choices made on Gizmodrome, the fusion of various musical elements and time signatures are brilliant but a risk if you don’t want to alienate a casual listener. There are also brave choices made throughout the album lyrically, Stewart Copeland’s unique singing voice talking about Satan on I Know Too Much is either sheer brilliance or complete lunacy; I fall on the side of brilliance but you will have to make your mind up. As a drummer myself, I am always appreciative of a great back line whether or not I like an album or a specific tune, and hearing Copeland on the kit playing alongside King’s bass gives me goosebumps that I haven’t had from many bands recently.

If you like your music inside the box this probably isn’t for you, it’s so outside of the box that I’m not sure there was a box in the first place. Like that last sentence, this album doesn’t make perfect sense but in a world of computerised music looking for the perfect riff, the perfect voice, talent shows looking for the perfect look, it is so refreshing to listen to something that doesn’t strive for perfection, it just wants to be four guys in a room having a blast.

It is a blast.

And I think Man in the Mountain perfectly illustrates how divisive this album is.