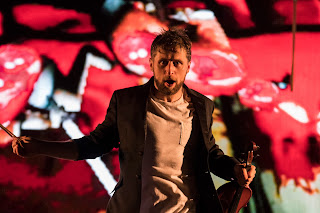 Enda Walsh and Donnacha Dennehy's new opera, The Second Violinist, comes to the Barbican Theatre in 2018...

A dazzling modern opera that tells the foreboding story of a life falling apart, The Second Violinist unfolds like an unnerving thriller driven along by a haunting and compulsive score.

Martin, an orchestral violinist, is consumed by social media platforms, morbid fantasies and violent video games. Seeking solace in the music of Italian Renaissance composer Carlo Gesualdo, his inner turmoil becomes ever more apparent as he searches for beauty in a dark, dark world.

Donnacha Dennehy’s music has featured in festivals and venues across the world including Carnegie Hall, Wigmore Hall, Edinburgh International Festival, Royal Opera House, the Barbican, BAM Next Wave, Tanglewood Festival, Holland Festival, Kennedy Center, Dublin Theatre Festival, Prototype Festival, Ultima Festival in Oslo, Musica Viva Lisbon, the Saarbrucken Festival, the Schleswig-Holstein Festival and Huddersfield Contemporary Music Festival. His music has been recorded by artists such as Dawn Upshaw, Iarla Ó Lionáird, Nadia Sirota, London Sinfonietta, Percussion Group of the Hague, the RTÉ National Symphony Orchestra, the Kronos, Doric and Jasper String Quartets among others for Nonesuch Records (US), Cantaloupe (US), NMC (UK) and Bedroom Community (Iceland). Recent large-scale works include The Last Hotel (2015) for Landmark Productions and Wide Open Opera; Tessellatum (2015) for Nadia Sirota and Liam Byrne; If he died, what then (2012) for Dawn Upshaw and the St. Paul Chamber Orchestra; Surface Tension (2015/16) for Third Coast Percussion; The Hunger (2012-16), a docu-opera for Alarm Will Sound; The Weather of It (2016) for the Doric String Quartet; and The Dark Places (2016), a cantata for Crash Ensemble. Dennehy joined the music faculty at Princeton University in 2014. His music is published by G. Schirmer, New York.

Enda Walsh is a Tony and multi award-winning Irish playwright. His recent plays include The Same (2017), produced by Corcadorca, Lazarus (2015) with David Bowie; Arlington (2016), Ballyturk (2014), Misterman (2012) produced by Landmark Productions and Galway International Arts Festival; and the opera The Last Hotel (2015) for Landmark Productions and Wide Open Opera. Other plays include Once(2011); The New Electric Ballroom (2009), Penelope (2010) and The Walworth Farce (2006) with Druid Theatre Company; Chatroom (2005) with the National Theatre; The Small Things (2005) with Paines Plough; Bedbound (2000) with Dublin Theatre Festival; and Disco Pigs (1996) with Corcadorca. For the past 10 years he has been supported by, and shown work at, St. Ann's Warehouse in New York. He has made four installation Rooms with Paul Fahy and Galway International Arts Festival: Room 303, A Girl’s Bedroom, A Kitchen and this year’s, Bathroom. His film work includes Disco Pigs for Temple Films and Renaissance; and Hunger for Blast and FILM4; and The Last Hotel which was made into a film for Sky Arts, produced by Brink Films, Landmark Productions and Wide Open Opera. In 2014, he received an honorary doctorate from NUI Galway.