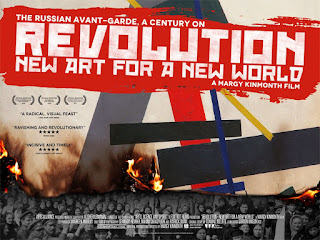 Following a very successful cinema run, the documentary about the art of the Russian Revolution, Revolution: New Art for a New World will air on BBC4 this autumn as part of the BBC’s Russian Season...

To mark the centenary of the October Revolution, the BBC is transmitting a selection of films and programmes across television and radio examining this significant world political event and evaluating its continued impact on society today.  Revolution: New Art for a New World was selected for the season as the definitive film covering the art of that period in history, which also spearheaded a paradigm shift in the framework of art at that time and since.

Revolution: New Art for a New World reveals the Avant-Garde movement that flourished after the October Revolution, only to be stifled by Stalin. Drawing on the collections of major Russian institutions, contributions from contemporary artists and performers and personal testimony from the descendants of those involved, this film brings the artists of the Russian Avant-Garde to life. 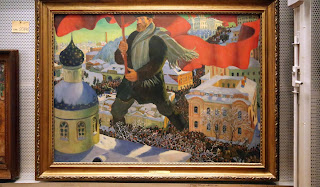 It tells the stories of artists like Chagall, Kandinsky and Malevich – pioneers who flourished in response to the Utopian challenge of building a New Art for a New World, only to be broken by implacable authority within 15 short years. With access to The State Tretyakov Gallery, The State Russian Museum and The State Hermitage Museum, the film features paintings previously banned and unseen for decades, as well as masterpieces which rarely leave Russia. The film also features Matthew Macfadyen, Tom Hollander, James Fleet, Eleanor Tomlinson and Daisy Bevan.

Director Margy Kinmonth says: “I am delighted that my film has been selected to air within the BBC’s prestigious Russian Season. It tells the story of the Revolution from the artists’ point of view, many never filmed before. I’m inspired as an artist to discover how many descendants are themselves working as artists today. Access to their intensely moving stories brings to life this extraordinary period of artistic innovation, which continues to exert such a powerful legacy one hundred years on.”

Revolution: New Art for a New World, produced & directed by Margy Kinmonth and co-produced by Maureen Murray,, running time 82 minutes, will air on BBC4 this Autumn (8th November at 9pm on BBC4 TBC)