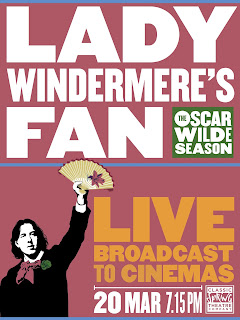 Casting has been announced for the live production of Kathy Burke’s Lady Windermere’s Fan...

The day of Lady Windermere’s birthday party, and all is perfectly in order. Until her friend Lord Darlington plants a seed of suspicion. Is her husband having an affair? And will the other woman really attend the party? First performed in 1892, Lady Windermere’s Fan explores the ambiguity of upper class morality and the fragile position of women in society in the late Victorian era in one of Wilde’s most popular and witty plays.


Samantha Spiro, Kevin Bishop and Jennifer Saunders are set to join director Kathy Burke as she brings together a talented comedic cast from her previous work on Absolutely Fabulous and Psychobitches. This marks Jennifer’s return to the West End stage for the first time in over twenty years as she takes on the role of The Duchess of Berwick.

Samantha Spiro plays Mrs Erlynne. Double Olivier Award-winner Samantha first came to fame playing a young Barbara Windsor in Cleo, Camping, Emmanuelle and Dick at the National Theatre, a role she recently reprised for the BBC drama Babs. Her other stage credits include The House They Grew Up In (Chichester Festival Theatre), The Taming of the Shrew (Shakespeare’s Globe) and Chicken Soup with Barley (Royal Court). She won the Olivier Award for Best Actress in a Musical for Merrily We Roll Along at the Donmar Warehouse. Her other screen credits include Carnage, Psychobitches and Grandma’s House.

Kevin Bishop plays Lord Darlington. Last year, Kevin starred in the BBC’s remake of the classic comedy Porridge, which has now been confirmed for a six-part series. His other screen credits include Tracey Ullmann’s Show, Rebel Wilson’s Super Fun Night and Peep Show. He also co-wrote and starred in Channel 4’s The Kevin Bishop Show, which ran for two series. His recent stage credits include a one-man show, Fully Committed, at the Menier Chocolate Factory, and Once In A Lifetime at the Young Vic.

Comedian, screenwriter and actor Jennifer Saunders guest stars as the Duchess of Berwick. Jennifer is best known for writing and starring in the sketch show, French and Saunders, for which she and Dawn French received a BAFTA fellowship in 2009, and the BBC sitcom Absolutely Fabulous, which won international acclaim, a BAFTA and an Emmy. Her other recent stage and writing credits include the BBC series Jam & Jerusalem and Blandings. Further casting for Lady Windermere’s Fan will be announced in due course.

Lady Windermere's Fan will be broadcast live to cinemas on March 20th 2018, thanks to More2Screen, following in the footsteps of the first play of Classic Spring’s year-long season of Oscar Wilde at the Vaudeville, Dominic Dromgoole’s A Woman of No Importance, which will be broadcast live on 28th November to over 370 cinemas across the UK and Ireland, enabling those that can’t travel to London to enjoy the production live in the comfort of their local cinema. A Woman of No Importance stars Olivier Award-winning actor Eve Best as Mrs Arbuthnot and BAFTA-nominated Anne Reid as Lady Hunstanton, alongside Eleanor Bron and William Gaunt.

Cinema tickets are now on sale for A Woman of No Importance on 28th November 7.15pm and Lady Windermere’s Fan on 20th March 2018 7.15pm: www.OscarWildeCinema.com

Tickets will go on sale later this year for the other two plays in the Oscar Wilde Season – An Ideal Husband and The Importance of Being Earnest.