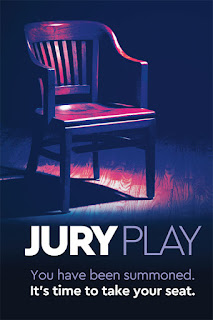 Directed by Ben Harrison, and co-written with academic Dr Jenny Scott, Jury Play will turn Traverse 1 into a ‘Court of Law’ to investigate the passive role of the jury in current court proceedings.

The production presents extracts of a fictionalised 52-day murder trial – the judge’s direction, the cross-examination of witnesses, the presentation of evidence – all suffocated in detail and legal jargon. The jury is additionally surrounded by the ‘extra-legal’ information they are improbably instructed to forget: tabloid headlines; the mugshot; the imagined murder scene; lurid descriptions of the accused.

Some jury members doze off, fiddle with their split ends, day dream, worry about the jobs they are missing, and disclose their inner monologues.

As the trial concludes, the jury is discharged to begin their deliberations – but one brave member admits that she has not understood everything that has happened and doesn’t feel equipped to make a decision. Surprised to receive the support of the Judge, what follows is a re-imagining of how a criminal trial might play out if the jury were to be afforded greater opportunity to ask questions and participate as Jury Play advocates the use of better dialogue and more transparent decision making in a process that fundamentally affects people’s futures.

Ben Harrison, Director and Co-writer, said "Inspired by the pioneering work of Dr Jenny Scott as she seeks to reveal all the forces acting on the jury, I am particularly interested in the way that the physical surroundings of the court could affect the conduct of the trial. In addition, the length of the trial, the lack of natural light, and being pulled away from work or domestic situations. Grid Iron and the Traverse have had a long and happy working relationship and this collaboration deepens it further with our shared ambition to create new texts and play with theatrical form – staging it at the Traverse, with its flexible seating, allows us huge opportunities to be playful with the architecture that the rigidity of an actual court room would not permit. I hope audiences will think anew about our jury system and whether it is fit for purpose."

Dr Scott responded "Working with Grid Iron and the fantastic artistic vision of Ben Harrison has meant that I have had the chance to expand the boundaries of jury research like never before. Jury Play represents world leading research and it has been a journey of inquiry in which we challenge the presumption of juror participation in criminal trials. I hope that Jury Play will allow the general public to take their turn in calling to question an institution which has remained unchanged since the 1800s."

Ben Harrison has been Co-Artistic Director of Grid Iron since 1996. In Scotland he has directed for the NTS, EIF, Traverse, Tron, Oran Mor, Arches, Citizens, Dogstar, Tromolo Productions and Paper Doll Militia. Grid Iron are an Edinburgh-based theatre company who have swiftly gained a reputation for creating high-quality, high profile shows. The Company went on to specialise in presenting shows in unusual locations such as a zoo, an oil-rig manufacturing shed, an airport, car park, foyers, hotel, bar, school or a climbing centre.

Dr Jenny Scott Jenny worked in the Arts as a musician before studying law, doing a PhD and turning into an academic. Her research focuses on the barriers to participation found in the criminal trial. Her work is interdisciplinary and multi-sensory. She calls to question the assumptions about the role of the juror by developing research that is embodied and accessible by the general public. Grid Iron believed in her ideas and it is as a direct result of their support and artistic vision that Jury Play has emerged. In term time Jenny teaches at Glasgow University.

Note: Jury selection will take place at the start of each performance. Audience members will have the option to opt in as they enter.