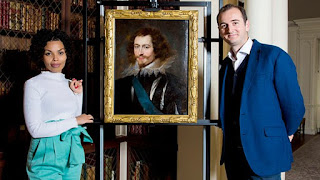 In a return to BBC Four tomorrow, Britain’s Lost Masterpieces has discovered a lost portrait by Sir Peter Paul Rubens on the walls of Pollok House in Glasgow...


The painting was identified by the art historian Dr Bendor Grosvenor whilst working with presenter and historian Emma Dabiri for a new series which begins on Wednesday 27 September on BBC Four.

Dr Grosvenor said, “The chance to discover a portrait of such a pivotal figure in British history by one of the greatest artists who ever lived has been thrillingly exciting. I hope it inspires many people to visit Glasgow's museums, some of the finest in the country. ”

Previously thought to be a mere copy of a lost original, the picture’s attribution was doubted in part to layers of dirt and overpaint. The background and other areas of the portrait were entirely overpainted by a later hand, obscuring many of Rubens’ trademark techniques. Conservation work carried out for Britain’s Lost Masterpieces by the restorer Simon Gillespie has now returned the painting, which belongs to Glasgow Museums, to its original state, allowing for a new assessment of the attribution to Rubens, considered one of history’s most influential painters and a pioneer of the Flemish Baroque tradition whose work is now worth millions.

Overwhelming evidence including technical analysis of the panel on which the portrait was painted proved that it was prepared in the manner used in Rubens’ studio. Dendrochronology (examining the tree rings of wood to date it) showed that the panel was likely created in the early 1620s, and a number of alterations revealed by cleaning and X-ray analysis in areas such as the hair and costume, demonstrated that the painting could not be a copy, but was Rubens’ lost masterpiece.

The portrait shows the Duke of Buckingham, James I’s lover. The King referred to Buckingham as his husband, and their relationship scandalised the court. Rubens’ portrait of Buckingham was painted in about 1625, but had been regarded as lost by art historians for almost 400 years.

Pollok House and its contents were donated to the city of Glasgow in 1967. Until now, only one British sitter painted by Rubens has been on display in Britain, the Earl of Arundel. The newly discovered portrait will now go on display at Pollok House, and is only the second portrait by Rubens in a public collection in Scotland.

Ben van Beneden, director of the Rubenshuis and a member of the Rubenianum, the Antwerp centre for Rubens scholarship, confirmed the attribution to Rubens, and said "The Head Study of the Duke of Buckingham is a rare addition to Rubens's portrait oeuvre showing how he approached the genre."

Cassian Harrison, Editor, BBC Four, added “BBC Four is a place for discovery and finding a new perspective, and it is thrilling that we are able to give audiences an insight into the uncovering of a new masterpiece and to find a work of art that was thought to be lost. I hope audiences will enjoy the rest of the series as we investigate the rich history of European art hiding in British public art collections.”

Pollok House is a country house right in the middle of a Glasgow city park, bordered on one side by the M77 and on the other side by the south side of Glasgow. It is owned by Glasgow City Council and lookedafter by the National Trust for Scotland. It truly is a house for the people, surrounded by the people. As well as an excellent tea room, Pollok has an impressive collection of Spanish art, the legacy of the man who once owned the house, Sir William Stirling-Maxwell.

This episode will be shown on BBC Four on Wednesday 27 September at 9pm in the first of the new series of Britain’s Lost Masterpieces.