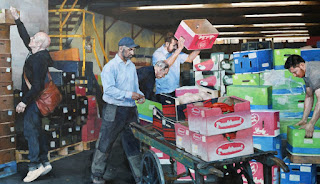 
With only a few days to go, Birmingham Heritage Week organisers are encouraging local people and visitors to start planning what they will see and do, as the countdown to over 100 events begins.

New events have been added to the line-up, including Flatpack Film Festival’s Birmingham On Film taking a new look at Birmingham’s waterways, with fun sessions and film screenings – with one even aboard a canal boat! Other new events include tours of St Margaret’s Church in Ward End, which dates back to 1516 and is home to a fascinating collection of Heritage monuments, and Beatfreeks will be hosting a series of masterclasses, talks and stalls as part of its Social Exchange event at Mac Birmingham.

Birmingham Heritage Week (7-17 September 2017) will offer something for everyone, whether you want to visit places that are not normally open to the public, take part in a city tour exploring everything from architecture to the city’s musical heritage, enjoy live music in a unique setting or view a classic film in a new context.

Siege! at Aston Hall (Saturday 16 Sept) – Be part of the action and experience a live Civil War in a recreation of the siege of Aston Hall that took place in 1643. Sponsored by Weslyan, this event will see visitors become part of the story!

Positively Birmingham Tour (Sunday 17 Sept) – Follow in the footsteps of the great Birmingham artist, Edward Burne-Jones and see some of the city’s most historic buildings and gain an understanding of the city’s origin.

Blakesley Hall Ale Festival (Saturday 16 Sept) – Fans of real ale there will be a able to sample a wide variety of ales and ciders in the picturesque and historic setting of Blakesley Hall’s gardens.

A Walk around Medieval Yardley (Saturday 9 Sept) – Join experts from the Birmingham and Warwickshire Archaeological Society in a stroll around the village of Yardley and discover its hidden medieval history.

Help Keep Moseley Road Baths Open Day (Saturday 9 Sept) – One of Birmingham’s most important heritage buildings and one of the nation’s most significant swimming pools will be hosting guided tours of this Grade II* listed building.

My Story, Our Journey: Sikh Migration into Birmingham and the Black Country (7-17 Sept) – This exhibition at Birmingham Museum & Art Gallery traces the journey of the Sikhs from rural Punjab, to modern day Britain.

Birmingham Heritage Week coincides with this year’s Heritage Open Days celebrations, which run from 7 – 10 September, and is the UK’s biggest festival of history and culture.

For full listings and more details about everything happening during the week visit http://birminghamheritageweek.co.uk/