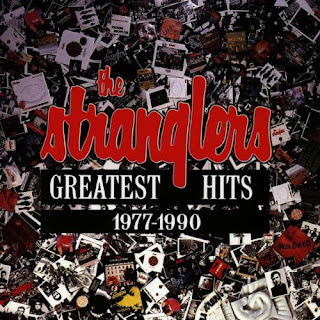 For Guilty Pleasures Day, Marc Nash admits that it's more than Skin Deep with The Stranglers...

Let’s start with the guilt. The Stranglers in recent years may have discovered their feminine side by donning women’s clothes and invading the stage of their headlining co-stars in the middle of their gig (Blondie, The Rezillos), but this doesn’t come close to absolving the horrendously sexist lyrics of songs like “Princess Of The Street”, “School Mam”, “Peaches” and “London Lady” from their first two albums. The first, a song about a streetwalker – itself perfectly legitimate as a subject covered by the likes of Lou Reed – here boasts the refrain, “She’s the queen of the street/ What a piece of meat”. “School Mam” is the everyday school story of a headmistress, er shall we say frottaging herself to ecstasy as she watches two pupils getting jiggy. The song lasts just under 7 minutes. “Peaches” – well all you need to know about “Peaches” is the rhyme, “Walking on the beaches/Looking at the peaches”. I’m not even going to talk about “London Lady” so unpleasant are its lyrics.

And now the pleasure. That sludge of deep bass guitar. More sludgy than an oil slick from a holed tanker. It enfurls you like the beating heart of your mother from when you were nestled in her womb. A primal, earthquakingly reverberative sound that is beyond moral judgement. It’s not perfect by any means, “Princess Of The Street” is a really slow song, the bass’s rhythm leaden, but oh that low end frequency just enslaves my brainwaves. The bass opening to “Peaches”, the dirty bass line of “School Mam” for what is after all a subject that is dirty, the signature Stranglers’ sound. I wanted to play bass guitar because of The Stranglers. No guitar heroics for me, I wanted to possess that thrum.

I used to work in a record shop, a very flagship punk one. The job application came with a questionnaire to test your character and weed out music obsessives. One of the questions was “Why do you think we don’t stock The Stranglers”? One of my colleagues had replied “Cos they’re sh*t, they’re sh*t, they’re sh*t”. He got the job. So what other myths pertain to the band?

Myth 1 – Bassist Jean-Jacques Burnel couldn’t actually play his instrument and the bass parts came from keyboard maestro Dave Greenfield. Burnel was only in the band to fight with fans and photographers at the front of the stage because it was de rigueur in 1977. Burnel’s 1979 solo album “Euroman Cometh” gives the lie to this, though he did in truth punch an awful lot of photographers.

Myth 2 – That 3 of the 4 band members were draft dodgers from their respective armies; Burnel from France, Jet Black from Sweden and Hugh Cornwall for Britain’s National Service. I think there’s something to this.

Myth 3 – After the heroin overdose death of The Ruts’ Malcolm Owen and Joy Division’s Ian Curtis’ suicide both in 1980, at school we ran a grizzly sweepstake as to which punk rocker/new waver would be next. I plumped for Hugh Cornwell on the basis of 1981’s single “Golden Brown” being his paean to heroin. I was wrong and happily Hugh is still alive today, though long having left the band.

Myth 4 – Given the chance to name our family Siamese kitten, I plumped for “JJ” in honour of my favourite bass player. Siamese are so inbred (the cross-eyes), that they’re a bit mental and JJ used to chase cars for their hubcaps and eventually succumbed to one. It seemed eminently fitting given his namesake.

Marc Nash is a fantastic writer who you can find peddling his wares, some hashtaggery (and fantasy football grumblings) on Twitter as @21stCscribe.

His books are available from Amazon here.
Image - Amazon