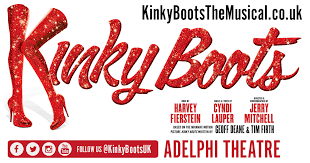 For Guilty Pleasures Day, VentSpleen walks tall in his 6 inch stilettos and talks about his love for the stage musical Kinky Boots...

What follows is a review of Kinky Boots, attended in May 2017 with the original cast. Cast changes have occurred since this date.

I have so many guilty pleasures. Except that I never feel guilty about any of them. My love of musical theatre and romantic comedies is something that I am proud of and, in this age of acceptable male emotionality, I see no issue with crying my way through Music And Lyrics. It could be argued that as the story told at the heart of Kinky Boot focuses around my home town of Northampton there is nothing remotely guilty about this particular pleasure. But when you consider that the musical tells of how a family shoe manufacturer saves the business by catering to those of us who enjoy wearing boots of a kinky nature then you have your guilty pleasure label in all its glittery finest.

Both the film and the stage play tell the true story of a Northampton based shoe factory which finds itself facing closure. In a desperate bid to save the business, recently bereaved son, Charlie Price, sets out on a journey of discovery as he contemplates catering for the drag market and reinforced stilettos. A chance meeting in London with the mysterious and strong willed Lola leads Charlie to a shoe market that few believe will end in anything but broken hearts and redundancy. Whilst both film and play are fantastic they differ in that the film utilises existing music with the play opting for an original score created by Eighties icon Cyndi Lauper. It is this glittery and magical score that catapults the stage play above the film in my estimations. Whilst many West End productions fall at the first hurdle because they lazily opt for gaudy effects or overpriced staging and gimmickry, Kinky Boots sets its stage in and around the shoe factory. It's true camptastic heart can be found with the central message of be yourself, celebrate individuality and don't conform to what others think you should be. Why be yourself? well as Lola herself would say, "because darling, everyone else is taken" Kinky Boot's success can be attributed to its creative spark, casting and because it is one of the most entertaining and fun shows in the West End today.

As soon as you get to the Adelphi Theatre (one of my favourite in all of London due to its art decor interior and commanding architecture) the iconic Kinky Boots branding hits you smack in the face. It is a work of genius with the K being 'Britished' with appropriate Union Jack colours. Kinky Boots wears its rambunctious and glittery styling so proudly that it is impossible not to enter into the spirit of the show before a single note is played. Once the marvellously old world Price and Sons jingle reverberates around the auditorium you are transported to Northampton and a strangely Northern sounding Mr Price Senior. As you would expect from a West End production the cast, swing and house band are stupendous and THIS is what makes London theatre the best in the world! Yes, I know I am biased but we just do it so well! Lauper has delivered a show that is so packed full of memorable songs that you have no option but to listen to the sound track album for months afterwards. Matt Henry isn't just playing Lola he IS her and sparkles ferociously on stage but at the same time hinting at the emotional vulnerability and need for adulation that burns at the centre of Lola's feisty heart. Killian Donnelly's Charlie Price is entirely believable and Donnelly's vocal ability is impressive. Personally, I have always disliked the habit of some stars to sing high emotional numbers with a kind of stomach cramping crouch and sadly Donnelly is afflicted with this terrible blight. Worse that it comes during the shows pivotal "Soul of a Man" and completely ruins the songs power and sentiment for me. Donnelly has enough West End Musical experience to notneed this sort of lazy crutch and I hope he realises it just isn't required in future roles. Any annoyance with the vocal theatrics are forgotten with Amy Lennox's astounding Lauren and her performance during "The History of Wrong Guys" was one of the funniest I have ever seen on a West End stage. The homephobic attitudes that Lola faces whilst trying to win over the factory's more resistant staff still sadly resonates today and yet the final denouement leaves a smile on your face that doesnt fade quickly. Leaving the theatre with the rest of the audience you are left with a theatrical experience that is of the highest quality.

When so many of us feel pressurised to conform and in uncertain times the need to fit in and not to rock the boat can be almost suffocating. Kinky Boots proudly exploded onto the London stage and showed all of us that to compromise who we are is to forget what makes us unique. Go and see the show and be entertained but perhaps find a fire that may have gone out or dimmed slightly. I will return later this year and enjoy again my guilty pleasure.