Turn That Noise Down - Midnight Oil 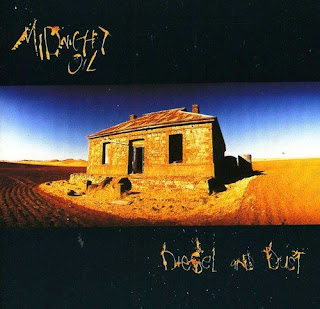 So many well-known albums turn 30 this year and Steve Taylor-Bryant and Susan Omand travel back to 1987 to revisit some of the sounds of their youth that made parents shout "Turn that noise down!" This week, Steve lights up some Midnight Oil with Diesel and Dust...

Diesel and Dust is the first time I remember getting interested in politics outside of my own situation, I remember asking many questions of my father who was pretty much my Google in 1987. I knew my Second World War history a bit from my studies at school, I was 12 at this time; a big boy now, I was already obsessed with American political history through my American friends on our military camp, and due to being the son of a man in the British forces I was fully aware of the Irish situation, had survived an IRA bomb, and knew how to look for car bombs with a mirror - at 12 years old! I didn't however know much about the rest of the world.

Diesel and Dust had some powerful songs and was full of what felt like revolutionary angst that just didn't come across on the Top of the Pops show each week so my father introduced me to the plight of the Aborigines and the land chaos and extreme poverty that was happening in Australia. As a child you just couldn't grasp the enormity of the problem, questions like 'why don't they just move?' and 'why can't they just take their houses back?' seem as innocent as you would expect from a 12 year old and were all met with the answer 'the world doesn't work like that' an answer I still can't believe, that childish innocence I had still exists, I still can't get my head around how one person can be evil to another.

So whilst Diesel and Dust made me question the worlds political state was it any good? Yes is the answer. It had the message of hope and change that I got in later years from The Levellers, it had all the anger and anti-establishment I'd enjoyed from brief foray into punk music, it was musically in tune with what I liked to listen to then, driving drums, heavy bass lines, and the vocals were so different to the pop rubbish that was filling radio back then. Stand out tracks on today's relisten are Beds Are Burning and The Dead Heart, two I remember from three decades ago, but I also thoroughly enjoyed Arctic World this time around.

I still don't completely understand the political issues of Australia, I don't really understand our own anymore either mind you, but without Diesel and Dust I would have continued living in my own little bubble so it's worth a listen just to broaden your own mind's horizon.