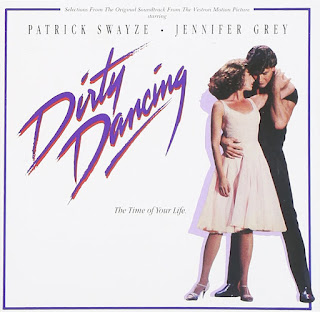 So many well-known albums turn 30 this year and Steve Taylor-Bryant and Susan Omand travel back to 1987 to revisit some of the sounds of their youth that made parents shout "Turn that noise down!" This week Susan carries a watermelon to the Dirty Dancing Soundtrack...


Oh, what? Yes, I’m going there. In fact I’m going there so much that you’re going to get an article about the film next month as part of an upcoming theme day on our sister site at The DreamCage so I won’t talk about the film that much at all just now (or at least will try not to) and treat the original soundtrack album as a standalone record, because it makes an interesting compilation in its own right.

The song that comes at the end of the film is the one that starts off the album, specially written for the film and featuring the wonderfully “grown-up” rich vocals of Bill Bailey and Jennifer Warnes, and I defy you not to do a bit of chair-dancing even if you don’t attempt the lift (although the lift is easier with the use of an office chair... a story for another time).

The Ronettes' Be My Baby is next and is one of the classics from the early 60’s era in which the film is set. Elaborate harmonies and simple lyrics, this is so typical of the Phil Spector sound.

Third track is She’s Like the Wind and boy, could Patrick Swayze actually sing. Oh, you didn’t think that was really him singing? Er... yeah it was. And no autotune then either.

Hungry Eyes, for me, is one of the weakest tracks on the album, even though it was one of the singles. Eric Carmen didn’t have a memorable voice and it all felt a bit kinda “meh” – like the song writers were trying too hard to follow the anthemic success of Time of My Life by following a similar formula but, without the voices of Bailey and Warnes, it sounds like a generic cousin I’m afraid.

Stay is a doo-wop oldie from the fantastically named Maurice Williams and the Zodiacs that you can’t help but dance to and that dancing continues with the very upbeat and boppy Yes by Merry Clayton that is just so much eighties pop.

The Blow Monkeys version of the Lesley Gore song You Don’t Own Me, notably (and – say it quietly – better) covered recently by Grace ft G-Eazy, is next on the list. It was an odd song to include on the soundtrack, not being the official original version, nor a song especially written for the film. But yeah, ok, it’s still not bad.

Hey! Baby follows and has one of those harmonica intros that you can’t fail to recognise if you’re into 60’s music at all. Fascinating fact – the player of that harmonica, Delbert McClinton, taught John Lennon how to play the instrument properly.

This Overload is next and, away from the context of the film, seriously reminds me of Peter Gabriel’s Sledgehammer, released the year before. Coincidence?

The short and sweet duet Love is Strange is next with that wonderful twangy guitar. Yes that’s the song that they crawl around the floor lip syncing to in the film. See? You remember it don’t you?

Where Are You tonight is the penultimate track on the album, the B side of the Hungry Eyes single and a solo outing for the lead singer (and founder) of the Doobie Brothers, Tom Johnston. You can hear his signature Doobies sound even in this song, written for the soundtrack.

Last song, In the Still of the Night, really does have that “slushy slow dance last song of the night” feel as we return to the doo-wop classic sound, this from The Five Satins. I can’t help but love that sleazy saxophone solo and it’s a superb way to end the album.

However, there are many notable exceptions of songs in the film that have been missed out of this soundtrack release, although they have been included in follow-up albums. Classic tracks like Frankie Valli’s Big Girls Don’t Cry, The Contours’ Do You Love Me, The Shirelles’ Will You Still Love Me Tomorrow and the sublime These Arms of Mine by Otis Redding. I may revisit these at a later date, indeed I likely need to bring some of you young-uns up to speed on the classics of the 50s and early 60s as a whole at some point but, for now, get ready for that lift...