Turn That Noise Down - Black 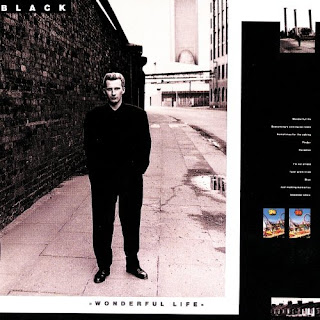 So many well-known albums turn 30 this year and Steve Taylor-Bryant and Susan Omand travel back to 1987 to revisit some of the sounds of their youth that made parents shout "Turn that noise down!" This week, Susan asks if it really is a Wonderful Life...

No need to run and hide
It's a wonderful, wonderful life

OK I’m cheating ever so slightly with this one as August 1987 saw the re-release, following a change of record label to A & M, for Black’s Wonderful Life but I really wanted to write about the album as it’s one of those that I bought just to get the one song. Now, sometimes this works amazingly well and you get an album of brilliance where the song that you bought it for is a crowning glory on a hidden treasure trove. Sometimes, though, it just doesn’t work out quite as well as you hoped and you get your one song and, well, that’s kind of it.

Wonderful Life, the song I bought the album for, the title track and the first song on the list is, indeed, Wonderful. The melancholy minor key, the simple chord progression and buckets of 80’s synth provide the best background for Black aka Colin Vearncombe’s distinctive voice. And then the saxophone solo kicks in for the break and it’s just so... so... “eighties” and I love it. The lyrics too, as well as having a surprising emotional depth when taken at face value, have a seriously sarcastic edge if you know the background to it; the song was written at a time when he was broke, had survived a couple of car crashes, his mother was very ill and there was absolutely nothing wonderful in his life. This song, for me, now has an extra level of poignancy since Vearncombe died in 2016 as the result of a road accident.

The rest of the album though couldn’t be more different. Black’s beautiful voice and the minor keys persist but the other songs never quite hits the height of simplistic perfection of the title track. Percussion heavy and much more upbeat, they remind me a lot of the electropop bands around at the time, like Soft Cell or the Pet Shop Boys, but without being different enough (or good enough) to stand out. The synth gets a lot more strident, the percussion generic and, all round, even in the slower songs, it lacks the softness and depth of the title track. That’s not to say it’s bad as an album, I just found it all a bit wallpapery and samey after a while and I had a tendency to wander off midway through the re-listen.

So my advice is to stick to the title track, buy the single not the album and pretend that it really is all still a wonderful life.