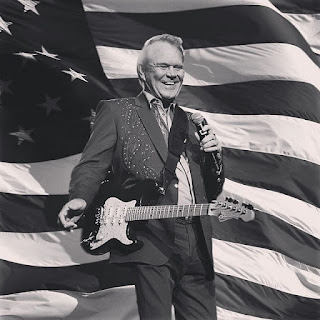 With the sad news from yesterday evening in mind, Susan Omand chooses a Glen Campbell track for Song of the Day...

I’ll be honest, unlike that of Prince, Bowie, Lemmy and all the other voices recently gone who have shaped my formative years, Glen Campbell’s death wasn’t an unexpected one. He was in the final stages of Alzheimer’s Disease and he and his family and friends were very aware that he didn’t have long for this world. You only have to look at the title and track choices on his last album, Adiós, just released in June, to see that and, as his wife Kim said at the time of recording that album, "What you're hearing when listening to Adiós is the beautiful and loving culmination of friends and family doing their very best for the man who inspired, raised, and entertained them for decades – giving him the chance to say one last goodbye to his fans, and put one last amazing collection of songs onto the record store shelves."

Even the most recent albums before that, including the heartbreakingly beautiful Ghost on the Canvas, show a man who had come to terms with his lot since his diagnosis in 2011. And it has definitely been quite a lot, considering his first album came out in 1962 and he’s been a staple on the country scene ever since. But he was highly influential to the songs of others too, working with everyone from Elvis and Dean Martin to The Beach Boys and Phil Spector. You can hear his guitar work on Frank Sinatra's Strangers in the Night, the Righteous Brothers' You've Lost That Lovin' Feeling and the Monkees' I'm a Believer. You can even see him on film as John Wayne’s sidekick in True Grit.

But, for me, it’s always been about his singing. I’ve been listening to his music for as long as I can remember, knowing all the words to Wichita Lineman and Rhinestone Cowboy before I even understood their meaning, singing along to Galveston and By the Time I Get to Phoenix before I was old enough to find the places on a map. I followed his work, even when it wasn’t cool to be country, and I knew that the end was coming, just as he did. So no, this wasn’t an unexpected one. But that doesn’t mean it’s any easier.

I hope he really does find A Better Place.