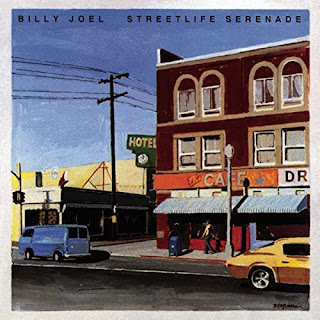 Nominated by Steve Taylor-Bryant to Save the Culture of Billy Joel, Romeo Kennedy sings the praises of Streetlife Serenade...

This pisky man has much love for the music of the piano man.

Never been too keen on the singles like ‘We Didn’t Start The Fire,’ although I appreciate it and lyrically it's fantastic if a little jarring and, as for ‘Uptown Girl,’ the less said about that the better. But other than those particular Joel peeves, there is no denying that Billy Joel has a wonderful plethora of work.

When listening to Billy Joel I tend to just go for the Best Of and skip the two tracks that I’ve mentioned. Its music that I like to listen to when I’m on the bus and out walking the dogs. His music has that melodic driving jazz/rock that I love and even the ballads have something special about them; the lilting quality of his voice and how that complements the melody of the piano.

It has been a while since I have listened to Billy Joel’s third album Streetlife Serenade, his second release on Columbia Records in 1974. It would be fair to say that this was the difficult third album that you hear artists talking about. That's not to say it is terrible. Far from it in fact. But there was only one single, The Entertainer, charting at number 34 in the US singles charts and the album was a spot below in the Billboard. Again that's not to take away from how Streetlife Serenade is and should be a celebrated album in Billy Joel’s body of work and it has all the elements of Joel that I love.

Kicking the album off with the title track, Streetlife Serenader. It has a beautiful wistful piano melody that is tinged with a sadness. This is brought together when the piano man himself starts singing. There are some really nice chord changes and, at times, it almost sounds that you have walked into a large auditorium following the sound of a lone piano player. As a title track it brings in the album slowly and at times has an almost Country feel to it. It is a song that you could hear Jackson Browne et al.

Next up is Los Angelenos. Opening with a tasty organ riff and backed up by a groovy distorted guitar riff, it is dirty and grubby but also raw. And has those classic Joel melodies in the bridge. If the title track is day then this is definitely night and one feels like they are standing on a street in L.A observing the goings on and what the night hides. Its a great rock song through and through.

But if that was rock through and through, The Great Suburban Showdown is Billy Joel meets country through and through. The Moog synthesizer jumps out at you in this essential county ballad. Not in a bad way at all; it almost sounds like someone is whistling along to the melody. The tone of the lap steel guitar harmonizes with the vocal melody beautifully.

Root Beer Rag is a fun interlude and showcases Joel’s talent as a piano player. The ragtime jazz melody with a plodding bassline and shuffled drums makes for a perfect Instrumental track. And again one cannot help but feel like they are in the middle of western saloon.

Roberta. Now, I love Joel’s ballads but this is far from my favorite, although that's not to say I dislike it. Joel’s vocals are fantastic and this track complements Los Angelinos. That night life has suddenly become all too real and Roberta (a lady of the night, shall we say) has become the love interest in this story. “I suppose my small change won’t see you through” Joel sings in a lamenting melody.

The Entertainer starts with a strummed acoustic guitar and synth. This, as I mentioned, is the only single from this album and, as a single it is a perfect choice. From the start it just builds and builds with the addition of different instruments, including banjo, plus a rhythm change for good measure. The song makes a mockery of the music industry. Joel sings about how if he isn’t here another year he won’t be on the charts, and how they will put him in the discount rack.

Last of The Big Time Spenders is that essential jazz piano track that the artist is famed for. And the album would not be the same without it. Track placing and pacing is very important for an album and this one is placed and paced perfectly. It changes the pace of the album in a small way but not a complete U-turn. But there are motifs in here that could be echoes from the other songs within the instrumentation and melody.

Weekend Song picks up the pace again. And is the ‘working man’ song that Joel is very good at. It has nice easy rock groove, with a little swagger. Like someone leaving the pub on a Saturday night a little worse for wear.

Souvenir is the hangover from the weekend in the sense of a pace change once again. It is slow and the lyrics talk about photographs and memories. It is a short ballad at only two minutes.

The Mexican Connection is another instrumental from this album. And is a summary of the overall mood and feel of this album. It has a Latin element to it with a bossa nova beat to back it up. But throughout there is a real simple but lovely guitar riff. Again it has the western feel that harmonizes with the Latin feel, bringing two worlds together. It is a great instrumental track and ends this album perfectly.

Every album needs to tell a story not just through the words but with the music. Streetlife Serenade achieves that. It tells a story from start to finish despite it not having an overall concept per-se. It is a subjective story that will differ from person to person, but it emotes a story of heartbreak, longing, searching for something, and trying to find a place amongst memories and in life.

But that's just my opinion.


Now for the next album and victim for #SaveTheCulture : Deceiver of The Gods by Amon Amarth. Swedish Viking metal. And I choose Nate McKenzie.