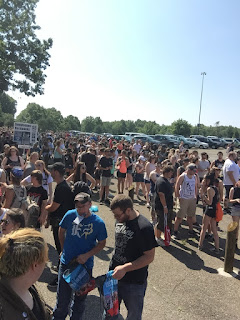 David Ames packs his emergency toilet roll and a few paperbacks and heads for a day of music as this year's Vans Warped Tour rolled into town...


So it’s that time of year again. I ventured forth into the wilds of northeastern Ohio to enjoy the 2017 Vans Warped Tour. Sadly, for the first time in five years, I had to fly solo. My normal Tour buddy David couldn’t get home from Peru to go with me this year but it’s cool because he was able to marry his beautiful and wonderful partner, Korrine. So instead, I drove the three hours and stood in line to get into this yearly tradition. I had never flown solo at Warped before but honestly, it was pretty fun. While waiting to get in, I was able to read through Marlowe’s Dr. Faustus and start Fitzgerald’s This Side of Paradise so I was also able to get a bit of work done while I waited.

Once inside, as is the usual, I bought a schedule to see when my favorite bands were playing. If you don’t remember from last year (see David's overview of last year here) or have never been to a Warped Tour yourself, there are multiple stages and around 50+ bands and these bands all perform at random times each day. Every day the lineup is different to make it fair for all bands playing. This is a great trait but it can also be frustrating if you wanted to see a band and they end up playing before you arrive. Therefore, I always get there super early to make sure that I can see whoever I want to see. The gates usually open around 12 and the bands start at 12:30 so arriving early is paramount. For me, this was especially important this year because one of the bands I came to see was the first one playing that day.

This year’s set of reviews is going to be a little different. Instead of doing huge reviews of each band, I think I want to do somewhat of a sampling of multiple artists. Little blurbs about each band to help spread the word about more than just two or three groups. So without any further ado, I give you the retrospective of Vans Warped Tour 2017. 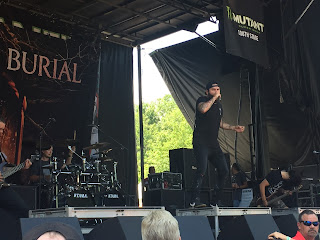 I had only heard a song or two from this band before the tour this year but I watched a few of their tour diaries on youtube and they seemed like such genuine guys that I had to see them play. As you can see from the picture, I was on the bar, front row, and they did not disappoint. By 12:30 it was already 92 outside and this stage was in the middle of an asphalt parking lot on a day with little to no cloud coverage. That being said, holy shit were they amazing. So much energy. The music is heavy and angry and genre-jumping but it all coalesced into an amazing set. Anthony Notarmaso said he wasn’t feeling that well but it didn’t stop him from destroying the vocals on every song and whipping the crowd into a frenzy. Do yourselves a favor and check these guys out. They are funny and entertaining and their live show delivers on multiple levels. I threw my neck out in the first ten minutes of their set jamming out to the grooves they were throwing down. 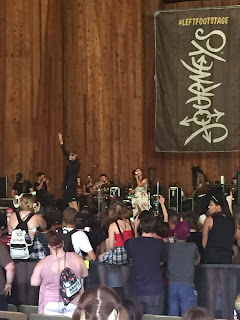 This was something strange for me. I was a huge fan of Watsky but only because of his work with the Epic Rap Battles of History. I had no idea he was a full on artist until my cousin sent me some of his stuff. Wow…this guy can rap. His flow is sick and his performance was incredible. I’ve never seen a rapper deal with the crowd like Watsky did. It was like being at a metal show. He had an incredible backing band and a female singer (I’m so sorry I didn’t catch her name) and he rocked that stage like he was at a Metallica show. Since the performance I have purchased every album he has released and I can’t stop listening to his work. He is clever and funny and intelligent. Basically, he is everything that modern rap should be but isn’t. Do yourself a favor and support him.

I had heard of these guys but mainly it was because of their incredibly catchy cover (here) of Taylor Swift’s “Blank Space”. I strapped in to enjoy myself with this group of guys that were polished and catchy but instead I was presented with a group of musicians who could not only play but could command a stage. They were heavy but carried quite the melody and they presented just enough of that metalcore vibe to really get the crowd going. They have been compared to A Day to Remember which I think is a fair comparison but not in a bad way. They release good music but where they really won me over was with their stage show which blew me away. So much energy and yet they still sounded perfect. Give them a listen or better yet – catch them live where they really shine.

That’s all for today but coming up will also feature Jule Vera, Fit for a King, The Ataris, Bless the Fall, Being as an Ocean, Silverstein, Bad Omens, and Fire from the Gods.