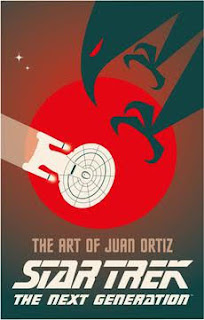 Titan Books announce the publication next week of Star Trek The Next Generation: The Art of Juan Ortiz...

What if every episode of Star Trek: The Next Generation was a separate film with its own movie poster? This latest treat from Titan Books for art-loving Trek fans features 178 full page posters (one for every episode) that capture the essence of The Next Generation in the styles of great movie poster art from the past. Inspired by indie-film and black-light posters, comics and rock/punk culture, this is not the first foray of the artist into the Star Trek Universe. Juan Ortiz is an avid Star Trek enthusiast and an accomplished artist that set out to create an art project representing each of the 80 episodes from the Star Trek: The Original Series. The artwork embodied his passion for the series, the transformational Sixties, and the visceral reaction generated from each episode. That book was published by Titan Books four years ago and now, with Star Trek: The Next Generation celebrating its thirtieth anniversary in September, Ortiz has "made it so" and tackled all 178 episodes of TNG for this book.

About the author - Juan Ortiz is an illustrator/designer for Disney and Warner Bros. and has pencilled covers for DC Comics Looney Tunes and Tiny Toons magazines. He is also the publisher of his own comic book series, Silver Comics, seen in the Disney/Dreamworks release I Am Number Four (produced by Steven Spielberg) as well as The Skull Army, a macabre/detective pulp, featuring his creation (named) The End."

We'll have a (suitably quote filled) review of the TNG poster book for you soon.