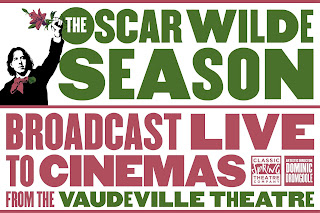 The first of four plays by the Irish comic master, A Woman of No Importance, will be broadcast live to cinemas on Tuesday 28 November 2017...

More2Screen will distribute Classic Spring Theatre Company’s newly announced Oscar Wilde Season live to cinemas in the UK and Ireland, followed by a recorded roll-out internationally. Classic Spring is the new theatre company from Dominic Dromgoole, former Artistic Director of Shakespeare’s Globe. The company’s first season is a year-long celebration of the late genius Wilde, one aiming to provide a much fuller picture of the man and the artist, revealing this much-loved but complex playwright as the brilliant renegade he was in his own time.

Multi-award-winning actor, director, comedian and playwright Kathy Burke will then direct Lady Windermere’s Fan, to be broadcast on Tuesday 20 March 2018. The Season will continue with the titles An Ideal Husband and The Importance of Being Earnest, with cinema broadcast dates to be announced in due course.

Christine Costello, CEO, More2Screen said "We’re completely delighted to be appointed as the theatrical distributor for this exciting theatre project. There’s a huge appetite for live theatre broadcasts from London’s West End and the Oscar Wilde Season will be a very strong offering to our cinema partners for their 2017-18 programme.”

Dominic Dromgoole, Artistic Director of Classic Spring, added “Oscar Wilde was a lover of the modern in all its forms, and I’m sure the idea that his plays could now be broadcast live to so many people, in so many places, would have delighted him. We are very pleased that these glorious plays are going to reach an even wider audience and have life beyond their runs in the West End.”