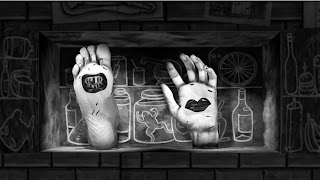 Known for her stylised black-and-white videos, Reid Kelley presents a new commission for the gallery as well as her 2016 work, This is Offal, in an exhibition which runs from 17 November 2017 – 18 March 2018.

Made in collaboration with her partner Patrick Kelley, her video works combine painting, performance and poetry to tell surreal stories inspired by history and mythology. Played by the artist acting multiple roles, her characters speak in poetic verse filled with wordplay and puns to tell stories that imagine unrecorded histories.

The new video work, We Are Ghosts, is set in a Second World War-era US Navy submarine, at the conclusion of the Pacific conflict. The crew, engaged more in fending off boredom than in combat, play musical instruments, concoct bootleg alcohol, and react to the just-announced atomic bombing of Hiroshima, as the news is read to them over the radio. In this new script, Reid Kelley’s characters speak in a poetic meter called trochaic tetrameter. This distinctive meter, used by William Shakespeare and Henry Wadsworth Longfellow, creates a feeling of artifice through its chant-like sound. By using this form of verse in conjunction with her black-and-white stylised characters and sets, Reid Kelley seeks to emphasise artificiality and resist realism. 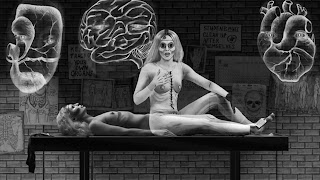 Originally commissioned as a performance for BMW Tate Live, Reid Kelley’s video work This is Offal 2016 is inspired by Thomas Hood’s 1844 poem The Bridge of Sighs, in which a male narrator laments and speculates over the body of a young woman who has committed suicide by jumping off a bridge into the Thames. In This is Offal, the speaking role belongs to the young woman herself- it is narrated by her corpse’s body parts and internal organs. From the vantage point of the dissecting table, the body and organs argue with each other as to who was ultimately responsible for the woman’s death, revealing the impossibility of a rational, scientific explanation for this tragic and complex event.

Mary Reid Kelley with Patrick Kelley, This Is Offal 2016, Single channel HD video with sound. Courtesy of the artists and Pilar Corrias Gallery.
Email ThisBlogThis!Share to TwitterShare to Facebook