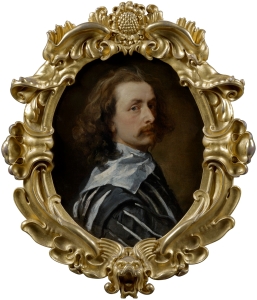 While, at first glance, Opie’s portraits are distinctly modern in their concise and abstracted forms, the style, composition and media are inspired by a variety of historic and contemporary visual sources. These range from ancient Egyptian and Roman art, and Dutch and British painted portraits of the seventeenth and eighteenth centuries, to eighteenth- and nineteenth-century Japanese prints, and the symbolic language of modern signage.

The influence of seventeenth-century British portraiture on the works in this display is evident in the elegant pose of several of the sitters, and the turning postures that playfully reference Van Dyck’s self-portrait. Viewing the old and new portraits side by side illuminates the influence and continuing relevance of Old Masters such as Van Dyck on British contemporary portrait practice. Julian Opie (b.1958) studied at Goldsmiths' College (1979-82) under Michael Craig-Martin, for whom he briefly worked as an assistant. He then emerged as an influential figure on the British art scene in the 1980s, with a series of painted metal sculptures. Opie’s portraits are created by a process of refinement of line and form, the result of which is a distilled image that nevertheless retains key signifiers that are enough to ‘read’ the subject’s likeness, such as the position of the head on shoulders, a facial feature or an accessory. His work has been exhibited extensively in galleries and museums worldwide. 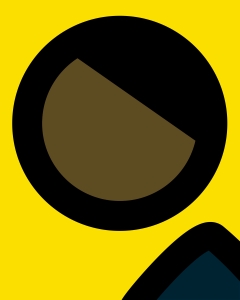 Julian Opie after Van Dyck is the final display of three to be held at the Gallery as part of the three-year tour of the recently-acquired Van Dyck self-portrait. In 2016 the work was reunited with a loaned William Dobson self-portrait, which had been in the same private collection as the Van Dyck for 300 years. Part of Painting the Artist: Van Dyck and Early Self-portraiture in Britain, this display included a selection of self-portraits from the Gallery’s permanent collection.In 2015, the Van Dyck self-portrait was accompanied by the loan of two portraits by the artist of Charles I and Queen Henrietta Maria from the Prime Minister’s official residence Chequers, for the display Van Dyck: Transforming British Art, which focused on the artist and his contemporaries.

Van Dyck’s last Self-portrait (c. 1640) is one of three known self-portraits painted by Van Dyck when he was in England, and it probably dates from the last years of his life. The artist shows himself fashionably dressed but apparently in the act of painting, the line of his right shoulder and sleeve suggesting his hand raised in the process of applying paint to a canvas just out of sight. The broad handling of the paint in the costume, compared with the face, may indicate that this area of the painting is unfinished, or it may be that this is simply a more experimental work than his formal court portraits. The frame of this painting, crested with the sunflower motif associated with the artist, is of outstanding importance and is likely to have been designed with Van Dyck's involvement.

Anthony van Dyck was born and trained in Antwerp, and went to work for the great painter Peter Paul Rubens while still in his teens. Quickly recognised as Rubens’s most talented assistant, he soon set out to gain wider experience. Van Dyck briefly visited England in 1620–1, and then spent six years travelling and painting in Italy. Work in Antwerp and the Northern Netherlands followed this, and then in 1632, he returned to England.

Here, he was created Principal Painter to King Charles I, knighted and housed at the king’s expense, and began producing paintings – almost all portraits. Portrait painting in England in the early seventeenth century was similar to Elizabethan portraiture. Fabrics and jewellery were minutely and beautifully depicted; while faces often had the appearance of expressionless masks. Van Dyck’s paintings, by contrast, with their command of perspective and space, confident brushwork and sense of movement, set a new standard to which his contemporaries and successors aspired. Artists ranging from Gainsborough to Sargent turned to him for inspiration.

This display marks the culmination of the Art Fund and Heritage Lottery Fund-supported Van Dyck: A Masterpiece for Everyone project, in which Van Dyck’s self-portrait was displayed alongside historic and modern art at galleries around the nation. The tour started at Turner Contemporary, Margate (January - May 2015) before continuing to Manchester Art Gallery in May 2015, Dulwich Picture Gallery between January and April 2016 and, until September 2016, at Birmingham Museum and Art Gallery, and finally in 2017 at the Laing Art Gallery, Newcastle-upon-Tyne, and the Scottish National Portrait Gallery, Edinburgh. All these venues have invited contributions from contemporary artists; these have included Mark Wallinger (Dulwich) and John Stezaker (Birmingham).

WEBSITE: Information about the Van Dyck Self-portrait including specially commissioned films detailing a period of conservation of the painting can be found on the Gallery’s website www.npg.org.uk/vandyck