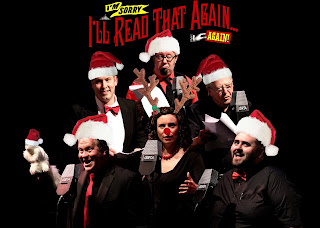 Now that Christmas in July is past, it's time to start thinking about Christmas in December and book for I'm Sorry I'll Read That Again (Again) - A Christmas Wonder Show...

Angus Prune OBE is back in Cheltenham Playhouse on Friday 8th December, with the Plum Pudding of Radio Comedy! After their critically-acclaimed tour this year, The OFFSTAGE Theatre Group once again recreates the famously full-frontal sketch show that laid waste to BBC Radio from 1964 to 1973. With a live band and sound effects this is promised to be a brand-new and strictly one-off compilation, celebrating the festive episodes of this anarchic and deliciously surreal comedy series that gave birth to The Goodies, Monty Python's Flying Circus and I'm Sorry I Haven't A Clue.

Stand by for wicked parodies, glorious puns and silly songs from the pens of Graeme Garden and Bill Oddie, as well as the return of the ever-frisky Lady Constance de Coverlet in the form of special guest star TIM BROOKE-TAYLOR!

From Doctor Zhivago (and his Magic Lamp) to Jack The Ripper (and The Beanstalk), via the unmistakable strains of the Angus Prune Tune and the unavoidable rudeness of The Christmas Hymns Dirty Songbook, this is a chance to meet again the much-loved characters first created by Tim Brooke-Taylor, John Cleese, Graeme Garden, David Hatch, Jo Kendall and Bill Oddie.

Here's a reminder of the madness from their tour:

And, if you would like to help The Offstage Theatre Group take their superb show out on the road again, you can donate to their crowdfunding page HERE