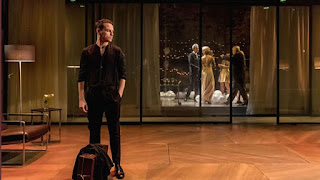 Directed by the multi award-winning Robert Icke and starring Bafta and Olivier award-winning actor Andrew Scott (Sherlock, Birdland, Pride), BBC Two viewers will have a front row seat at the innovative production, which transferred to the West End’s Harold Pinter Theatre for a limited season following a sell-out run at the Almeida this year. The run comes to an end at the Harold Pinter Theatre on 2nd September 2017.

Patrick Holland, Controller, BBC Two said “Andrew Scott's Hamlet is utterly thrilling. His performance makes each familiar word of the play feel like it is being newly discovered. The staging in a modern-day Denmark makes for a startlingly resonant and challenging production. I am delighted that it is coming to BBC Two.”

Robert Icke, Director (and Almeida Theatre Associate Director) added “It has been a real joy to work with such a gifted and dedicated company of actors on bringing this most-famous play to audiences in 2017. The production has been on a wonderful journey from the Almeida to the West End, and I am very much looking forward to this next step on BBC Two. To be able to offer our version of Hamlet to as wide and diverse an audience as possible has always been of paramount importance to us, and now we are thrilled to be able to bring it to people across the country.”

Produced by Ambassador Theatre Group, Sonia Friedman Productions and the Almeida, Hamlet has designs by Hildegard Bechtler, with lighting by Natasha Chivers, sound by Tom Gibbons, and video design by Tal Yarden. Casting is by Julia Horan.

Hamlet will broadcast on BBC Two in 2018.